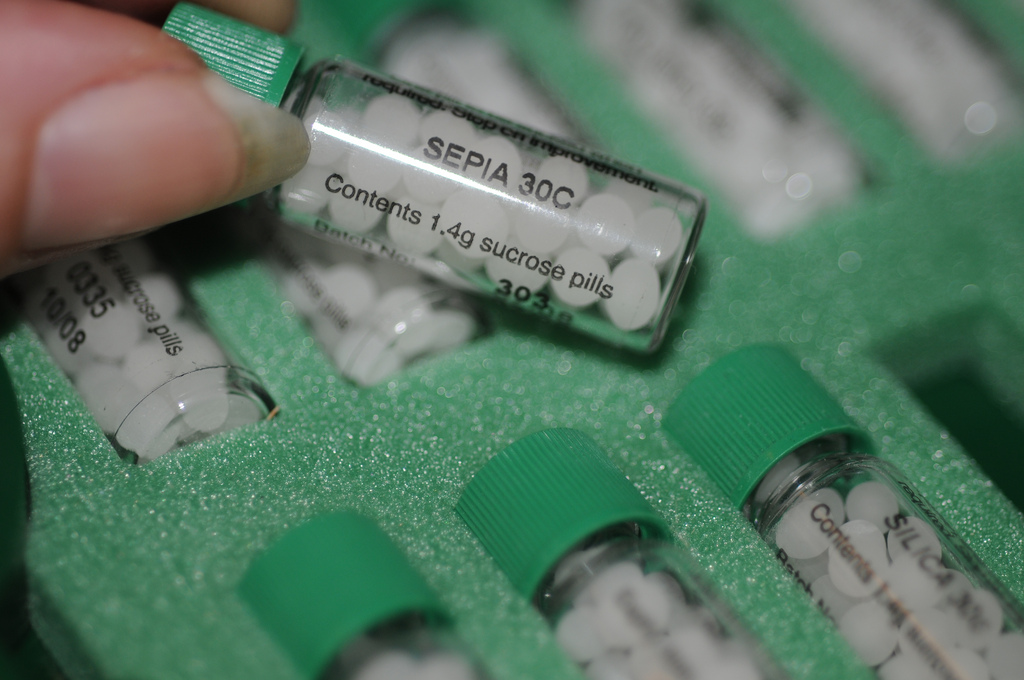 Those who subscribe to the cult of homeopathy tend to be afflicted with a continually confused attitude to the concept of evidence. On Weds 25 November 2009, the House of Commons Science and Technology Sub-Committee convened for an Evidence Check on Homeopathy. Amongst the ‘witnesses’ was Dr Peter Fisher, Clinical Director and Director of Research at the Royal London Homeopathic Hospital (now the Royal London Hospital for Integrated Medicine). Dr Fisher unashamedly described the process of succussion (forward to 11:06). In case you’re not familiar, this is the action of vigorously shaking/striking a vial of liquid in order to activate the memory of a substance (ie, the ‘remedy’) that has been diluted out of it, whilst simultaneously detoxifying the effects of all the other stuff the water will inevitably have come into contact with (because water is promiscuous stuff).

The Government Response to the Committee’s report concluded overall that:

However, despite this concurrence, the Government then weasel-y left it to Primary Care Trusts to decide whether to continue wasting NHS funds on homeopathy, under the sopping guise of patient ‘choice.’ (Homeopathy enjoys sympathy among MPs – including from the Secretary of State for Health.)

The majority of homeopathic products licensed by the MHRA are registered under a 1992 Simplified Scheme that prohibits ‘indications’ – ie the associated description of disease/conditions, and medical/therapeutic claims thereon. These MHRA regulations on the advertising of medicinal products thus inform the Advertising Standards Authority, which on 1 March 2011 widened its scope to encapsulate marketing/advertising on UK websites. And thereafter received copious complaints about the online claims made by an array of homeopaths/homeopathy organisations (to the extent that it requested abeyance). The ASA contacted the complained-of advertisers – and those UK bodies that represent homeopaths and homeopathy. Its letter explicitly states:

‘You must remove any content from your website that claims directly or indirectly that homeopathy and homeopathic products can diagnose/treat/help health conditions.’

This letter (well worth a read, by the way) also informed addressees that their sites were under surveillance, with three months in which to comply with guidance on the marketing of health-related products and services, as stipulated by the Committee of Advertising Practice (CAP).

During British Homeopathy Awareness Week back in June last year I took umbrage with various homeopathy organisations’ cheap, egregious, fallacious resort to endorsement by celebrity, including (to take just one) the British Homeopathic Association. The British Homeopathic Association’s ‘Celebrity Photography Project’ comprises quite fetching images of partaking celebs ‘… holding the source material of one of the homeopathic medicines that has helped them’ . If I’ve piqued your interest then, rather than take up word space here with quotes, I urge you to peruse for yourself this Goof’s Gallery.

I’m sure these celebrities are being ‘genuine’, in that they believe what they say. (After all, they subscribe to a belief system for people who like to feel all “Speh-shull.”) But I found this puzzling. Doesn’t that ASA letter apply to ‘… those bodies that represent homeopaths and homeopathy in the UK…’? Which must surely, I figured, encapsulate the British Homeopathic Association. Indeed, the Association’s website proudly boasts:

‘The British Homeopathic Association exists to promote homeopathy practised by doctors and other healthcare professionals.’ (My emphasis in bold.)

I therefore decided to flag this up to the ASA, because, to my eye, these celebrities are not only making/implying ‘… claims directly or indirectly that homeopathy and homeopathic products can diagnose/treat/help health conditions’; but they also imply ‘indications’ for these products, the majority of which are listed as registered under the MHRA Simplified Scheme (which prohibits indications). The ASA letter contains a paragraph I find particularly pertinent here:

‘Please note that testimonials from patients (which must be genuine) that imply efficacy for homeopathic treatment do not constitute substantiation but may give a misleading impression that efficacy is proven. Therefore it is essential that any testimonials also only make general references to an improved sense of well-being.’

Clearly, these celebrity statements constitute patient testimonials which imply efficacy for (unsubstantiated) homeopathic treatments. It appears to me that this project overall constitutes website content that (at the very least) ‘… claims directly or indirectly that homeopathy and homeopathic products can diagnose/treat/help health conditions.’ Which, to reiterate, are ‘Claims you cannot make’ under the CAP Code, as applies to advertisers, ‘… as well as those bodies that represent homeopaths and homeopathy…’.

The ASA declined to pursue this apparent anomaly. I had also written to the MHRA, whose guidelines also prohibit celebrity endorsement, but was informed (even though the remedies named by the celebrities marry with product names in its registration listing) that it only concerns itself with direct advertising of ‘specific homeopathic medicinal product.’ As the BHA is not itself selling products, its celebrity endorsement falls outside the MHRA remit, as it constitutes promotional material, and on which it suggested I contact… the ASA. However, the ASA is likewise adamant that this complaint does not come under its remit (in apparent contradiction of its own letter) because the British Homeopathic Association is not itself directly supplying or transferring goods. So much for acting in the public interest.

As if a ‘senior homeopath’ spouting aqueous nonsense without compunction to a parliament committee is not ridiculous enough. What we have here, in effect, is a situation wherein, if you sell or provide certain dubious products and/or services, but are barred from making claims as to their efficacy, you can happily watch your representative umbrella organisation, which does not itself directly supply/sell/provide those products/services, make those claims indirectly on your behalf. Hence this permitted proxy-promotion of indication-prohibited, homeopathy products through a bunch of docile celebrities. A snake-oil-lubricated loophole.

The star dust we all knew as (Sir) Patrick Moore sadly gave up its persona on the 9th December 2012. But Patrick is still with us – his books and legacy of years of BBC broadcasting will continue to inspire.

We will remember Patrick not only for his monthly Sky at Night broadcasts (the longest lived of any BBC TV series) and his astronomy books, but also for his outings as a xylophonist, pianist, composer, children’s Gamesmaster TV program host and, as his friend Brian May (of Queen) reminded us when interviewed, also as an animal rights campaigner and simply a generous person.

This was a man who NASA had consulted to help determine the best lunar landing sites for the Apollo space missions such was the accuracy of his hand-drawn moon maps. In his youth during the Second World War he spent time training as an RAF navigator but was soon invalided out (fortunately for us all) due to a medical condition. He sadly lost his beloved fiancée during this time in a bombing raid, the tragedy of which haunted him for the rest of his life. He never married.

“We just don’t know!” was Patrick’s signature statement at the end of many a Sky At Night episode when little more than speculation could be brought to bear on certain unexplained astronomical phenomena. It seems however that as far as his own fate was concerned he was a little less uncertain.

Patrick, who was every bit the quintessential British gentleman with more than a touch of eccentricity, was by all accounts not a particularly religious man but neither was he an atheist. Recently when asked if this life was all there was, he replied in non-committal jokey fashion: “I’ll report back to you when I get there.”

Patrick had been wheelchair-bound for some years due to an aggravated spinal trauma sustained during his war time RAF training. When pressed on how he perceived his final years and failing health he showed his usual stoicism and expressed the expectation that this life was not all there is: “We go onto the next stage. I shall be interested to see what it is.” For some this attitude might be puzzling coming from a man of science, but insofar as he did not ally himself with a particular religion, nor make this pantheism (if that’s what it was) an issue worthy of publicity, we can surely allow him this.

Though he had no living relatives, Patrick spent his last hours in the company of carers, his cat Ptolemy, and “family” notably his three devoted “sons” who, it was only recently revealed, had been taken under his wing many years previously to provide the father figure they had lost with the untimely passing of their own. How very touching. With the news that doctors had allowed Patrick to return home being unable to do more for him since contracting an infection in his already weakened condition, his sons arrived at his bedside realising that this was the end. Holding his hands and administering brandy to his lips, they witnessed their dear father slide into his last slumber – star dust giving up its precious and unique persona.

We salute you Patrick. Thank you dear man for your legacy and the important role you played in so many people’s lives making it impossible to ignore the wonder of the stars and the excitement of scientific discovery.