[W]e see, surrounding the narrow raft illumined by the flickering light of human comradeship, the dark ocean on whose rolling waves we toss for a brief hour; from the great night without, a chill blast breaks in upon our refuge; all the loneliness of humanity amid hostile forces is concentrated upon the individual soul, which must struggle alone, with what of courage it can command, against the whole weight of a universe that cares nothing for its hopes and fears.
From “A Free Man’s Worship” by Bertrand Russell 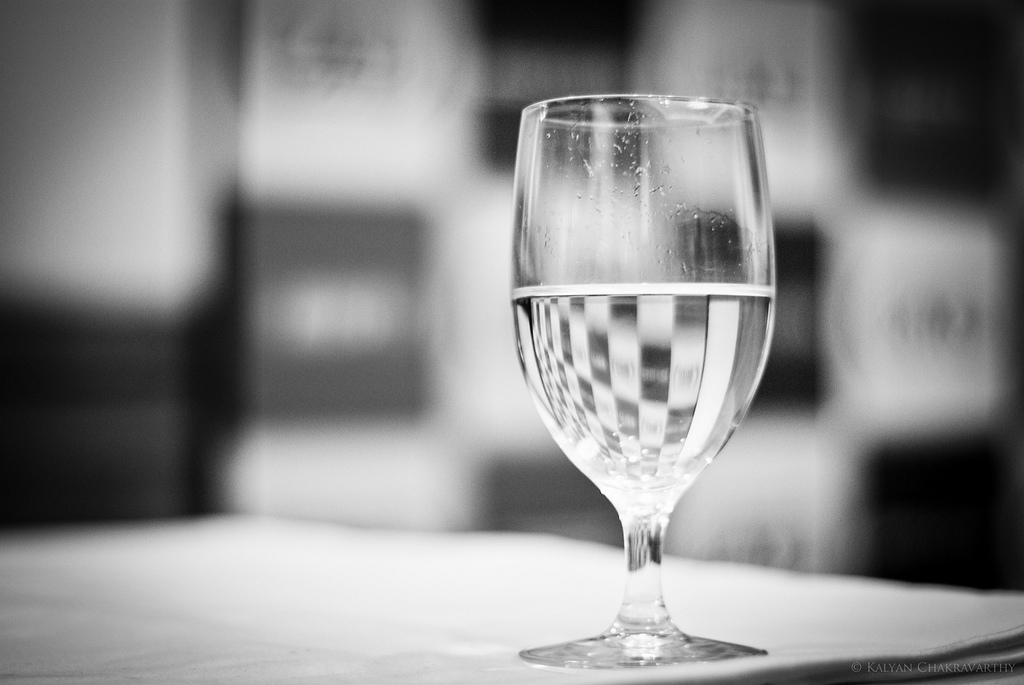 How full is this glass? Vir Narain muses on consolation and optimism.

Bertrand Russell was a courageous and defiant man who would not hesitate to discard a comforting belief – perhaps even if he suspected that it was true.  Along with other humanists, he wanted people to have the courage to give up the comforting religious myths about a caring and loving God and face life as it was.  As Narsingh Narain said: “Our ancestors solved the problem of pessimism (in so far as they did solve it) by convincing themselves about a future life guaranteed by the existence of a merciful and all-powerful God.”   So “… belief in gods produced an unintended result by restoring that optimism which is natural to life but had suffered disturbance as a byproduct of man’s mental evolution.  It was more necessary to regain that optimism than to achieve external results.  A life weighed down with chronic fear and anxiety would lack the spirit and the power to face and survive misfortunes.  In comparison the lessening of the severity of the misfortunes themselves was not so important.”  Russell conceded that: “… belief in God still serves to humanise the world of nature, and to make men feel that physical forces are their allies.”

It is very important, but practically impossible, to avoid using words such as hostile, friendly, pitiless, uncaring etc. when discussing the relationship of man with nature.  It is perhaps best not to attempt it here.  Russell talks of “humanity amid hostile forces”.  Carl Sagan says:  “The universe seems neither benign nor hostile, merely indifferent.”  Narsingh Narain says: “Let us have the courage to accept the fact that the universe does not care for us, for the human race or for life.”

I shall argue that there is an element of exaggeration here; perhaps as a reaction against all the religious nonsense about a loving and caring God.  If humanity was surrounded by hostile forces, as suggested by Russell, it would not have survived even for a nano-second.  The anthropic (a needlessly anthropocentric misnomer) principle cannot be lightly dismissed. The very existence of life shows that the laws of nature are pro-life which, of course, entails being pro-death as well.

“The philosophy of nature” says Russell “must not be unduly terrestrial; for it, the earth is merely one of the smaller stars of the Milky Way.  It would ridiculous to warp the philosophy of nature in order to bring out results that are pleasing to the tiny parasites of this insignificant planet.” (Emphasis added).  But these tiny parasites are, as far as we know now, the only living beings in this unimaginably vast universe. And size is not everything. Isaac Asimov tells us: “Man’s three pound brain is the most complex and orderly arrangement of matter known in the universe.” In any case, we cannot escape being terrestrial when dealing with the relationship of life with nature, with the philosophy of life. The Philosophy of Life is a subset of the Philosophy of Nature.

According to Russell, “Optimism and pessimism, as cosmic philosophies, show the same naïve humanism; the great world, so far as we know it from the philosophy of nature, is neither good nor bad, and it is not concerned to make us happy or unhappy.  All such philosophies spring from self-importance, and are best corrected by a little astronomy.” Even if optimism and pessimism are ‘cosmic’ philosophies: they have an exclusively human context and deal with human attributes.  A little biology – rather than a little astronomy – might be more helpful in understanding the relationship between life and nature.

The astonishing facts of evolution which has produced so many, and so diverse, near-perfect forms of life; the incredibly complex immune systems which are constantly fighting to protect each individual   creature from infectious disease; the delicately poised and infinitely complex ecosystem which holds these life-forms in balance and, above all, the miraculous emergence of creatures which are capable of abstract thought, all point to the life-promoting processes of nature. The pessimistic view that nature is hostile or indifferent to life as such is not supported by the facts of science.  Also, this view promotes an unhealthy man-versus-nature mindset: nature is to be conquered or subdued.

Narsingh Narain quotes Colin Wilson as saying: “… the task of Humanism is to attempt to destroy pessimism wherever is appears”. This is an important task which is becoming more difficult with the passage of time. Increasing urbanisation and industrialisation – among other conditions of modern living – are leading to unprecedented levels of angst and alienation.  Presenting a needlessly gloomy picture of nature does not help.

As the half-full/ half-empty glass cliché shows, pessimism and optimism represent two mutually exclusive attitudes which are not necessarily fact-dependent. Only a robust and positive attitude in the face of adversity can enable us to cope with the vicissitudes of human life. As Narsingh Narain says: “Let the tender-minded continue to hug the old delusions or invent new ones. For the tough-minded, stoicism is the only dignified answer.”  Iris Murdoch’s observation: “Anything that consoles is fake.” is largely true.   But the belief that nature supports life is not a consoling myth.  Even down to the level of the individual, as our immune system shows, nature is at work to preserve life up to a point.  Inevitably, it withdraws this support in the fullness of time. This shows nature’s triune character as creator, preserver and destroyer.

Even without the idea of an uncaring or hostile nature, the challenges to man’s fortitude are enormous.  If this idea no longer seems to conform to the facts as we know them now, it should be discarded.  Homo Sapiens must guard against becoming Homo Ingratus