“Common Ground: A Conversation Between Religious Believers and Humanists on Values and Ethics” was a conference in Glasgow in November co-sponsored by the UK and US Provinces of the (Catholic) Xaverian Missionaries. Speakers included Chris Stedman, author of Faitheist – How an Atheist Found Common Ground with the Religious and Assistant Humanist Chaplain at Harvard University. Jeremy Rodell is Chair of South West London Humanists and was one of seven delegates from the BHA and the Humanist Society of Scotland. They also included Rory Fenton, AHS President and the BHA’s Dialogue Officer.

As a humanist living in London, it was a bit of a surprise to get an email from the British Humanist Association asking if I would like to attend a conference in Scotland organised by Catholic missionaries. I’m glad I said “yes”.

This was a bold initiative by the Xavierian Missionaries to find “Common Ground” across one of the most important fault-lines of western society, especially here in the UK. I did not need convincing of the value interfaith dialogue involving humanists – I was already involved in it. But I left the conference convinced both that more could be done and that what we’re doing today could be done better.

The conference itself was, of course, an example of dialogue in action. I had never met a missionary before and, if I’d thought about it at all, would probably have come up with the caricature of a Bible-bashing neo-colonialist. What I found were thoughtful people who had made major practical contributions to the lives of people in the countries where they’d lived – in one case helping to end a devastating civil war. That doesn’t make me more comfortable about Christian proselytization, but it certainly provides a more nuanced perspective. Equally, I don’t think many of the religious people present had met a humanist before. There were a lot of fascinating and enlightening conversations.

My main “takeaway” was that, at its core, this is all about human relationships. If people from different backgrounds know each other and have listened carefully enough to understand where the other person is coming from – and perhaps have worked together for a common cause – then it becomes almost impossible to demonise “The Other”. That doesn’t mean they will agree on everything. What Chris Stedman referred to as “Kumbaya” interfaith, where everyone loves one another and genuine differences are suppressed, has limited potential. But we were able to demonstrate at the end of the conference that, once trust has been established, it is possible to articulate conflicting views on controversial issues while maintaining mutual respect. 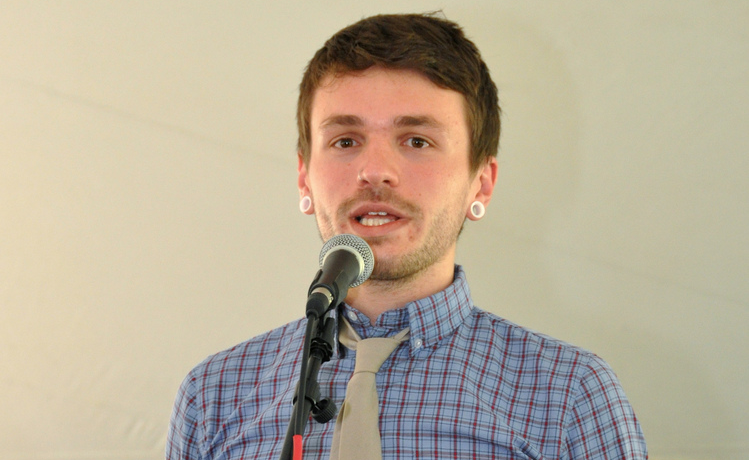 Chris Stedman, author of Faitheist, who spoke at the event.

However, we shouldn’t be naïve. There are people within almost all religion and belief communities who have no interest in dialogue – they know they’re right and at best want either to isolate themselves, or to argue, and at worst to impose their views by force. They’re just not interested in listening and understanding people they consider to be “the enemy”. On the other hand, there are people in these same communities who understand that we live in a plural world in which mutual understanding is essential for peace, and where it is often possible to find common ground with those with whom we disagree. We learned from Chris Stedman that Eboo Patel, the US-based founder of the Inter Faith Youth Corps, refers to the divide between these two types of people as the “Faith Line”.

Those who organise and turn up to a conference on dialogue between believers and the non-religious are, by definition, on the liberal side of the Faith Line. But the fact that we don’t directly reach the hard liners doesn’t invalidate the exercise. They can only be reached, or perhaps faced down, by more open-minded people from their own belief backgrounds – people on “our side” of the line. It is by dialogue that we can all become better informed and feel better supported in advocating the interfaith approach within our own communities.

So what does that mean in practice?

Firstly, we need to get past some of the issues of language. Humanists don’t really like the term “interfaith”, or “interfaith dialogue”, which sound excluding, as Humanism isn’t a faith. But we need a term for dialogue between people with differing religious and non-religious beliefs, and “interfaith” is very widely used. Humanists should not be afraid to use it too. But we need the help of religious people to ensure that it’s understood to cover “faith and belief” not just religion.

More significantly, the conference demonstrated a misunderstanding over the meaning of “secularism”. I understand it to mean a level playing field, in which people are free to follow their religious and non-religious beliefs and practices – provided they do not erode the freedom and rights of others – with no particular group or organisation having privileges over others. In a secular society, freedom of religion and belief is protected. Like most humanists, I think that’s a good idea. Unfortunately, too often the term has been used to mean “anti-religious”, not helped by the fact that there are some atheists who, as well as advocating secularism, would also like to see the end of religion. The result was that many of our religious colleagues at the conference thought that, when humanists say we want a secular society, we mean one in which there is no religion. It was something of an “ah-ha” moment when everyone realised that was not the case.

Secondly, “doing interfaith” needs to be more than sitting on a committee, useful though that may be. It needs to involve more people from different backgrounds getting to know each other, maybe in informal settings, through social media or – ideally – through shared community activity. That doesn’t necessarily mean creating a new organisation or activity, but rather finding something that is fun, stimulating and has a doable objective.

At the risk of gender stereotyping, it’s useful to be aware that men and women may come at interfaith, and especially the involvement of the non-religious, from different angles. Callum Brown’s academic analysis suggests that changes in women’s lives have been the main driver of the significant move away from religion in the UK since the 1960s. But he says that arguments about science and rationality have not played the key role here – “community” factors have been much more important. The implication for interfaith work is that the more cerebral type of interfaith dialogue about ideas may, on average, be more appealing to men than women, who may be more attracted by practical community activity. Both have a role to play.

Coming from the south of England, it was interesting to find that Scotland – which is probably less religiously diverse than London – seems to be way ahead in terms of official recognition of the importance of interfaith dialogue and inclusion of the non-religious, as well as providing practical help on how to make it work. “Belief in Dialogue” is an official publication by The Scottish Government providing a “good practice guide to religion and belief relations in Scotland”. Its introduction is written by Sister Isabel Smyth, Chair of the Scottish Working Group on Religion and Belief Relations, who was among the conference attendees. In it she links the need for dialogue back to the values of wisdom, justice, integrity and compassion which we saw inscribed on the Scottish Mace when the conference visited the Parliament in Edinburgh. These are shared human values – no humanist would disagree with them.

“Belief in Dialogue” is clear about the involvement of the non-religious: “The need to recognise the equal legitimacy of every community to exist in Scotland is enshrined as a human right, and by this we need to think about community in the broadest sense of the word. While most religious communities have established formal structures, non-religious communities and groups have considerably fewer formal structures but still need to be seen as communities in the sense that those who advocate such beliefs are bound by the beliefs they share.” It goes on to provide practical ways of building interfaith relationships which anyone can use. You can download it free from The Scottish Government website.

The rest of us would do well to steal its thinking.

Jeremy Rodell is Chair of South West London Humanists, the humanist representative on two local interfaith forums, and a humanist speaker for 3FF, an interfaith charity which provides panels of speakers from different religion and belief backgrounds to schools in London and elsewhere. He’s currently co-chairing a local dialogue between humanists and Catholics in Twickenham, following a major dispute about a new Catholic ‘faith’ school with exclusive admissions. If you want to know more, email chair@swlhumanists.org.uk.