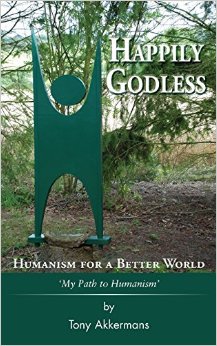 Happily Godless: Tony Akkermans shares his thoughts on Humanism, and much else, in this book, released 29 August 2014.

Once upon a time there was, in the Western world at least, but a single god. Closely defined with clear-cut attributes. Omnipotent, omniscient, omnipresent, omnibenevolent. In fact so many omnies that from here on in I shall refer to him as Omnigod. I am talking, of course, about the god of the Bible and the Koran, the creator of heaven and earth. A hands on god who controls every happening here on earth, who is compulsorily worshipped in school assembles, who is at the heart of church services, who hears prayers and who, if they cross themselves in good time, makes footballers score goals.

For some two thousand years this father figure god has had a very good run for his money. He has been feared and worshipped unfailingly and his every capricious move has been meekly documented and accepted. But things are changing. All is not well with Omnigod. Wicked, troublesome rationalists have started ganging up on him. They have been pointing out major weaknesses in his lifestyle, such as the total lack of evidence for his existence. This is greatly worrying his self-appointed representatives on earth. All the great minds in the churches have got together in a telephone box and have racked their brains over a proper line of defence. After Herculean metaphysical labours, laced with much prayer, they have come up with the solution: Omnigod must be given a makeover.

A collection of brand new words and phrases have been brought to bear. Out goes the Omni and in comes the obfuscation. God is now the ‘Ground of all Being’ he is the ‘Ultimate Reality’. He is unfathomable, ineffable and unknowable. He is woollier than a champion sheep. Let Dawkins try and shear him now. The trouble is that if rationalists can’t get to grips with such an elusive customer, then his befuddled apologists can’t either. As Freddy Ayer has said in Language Truth and Logic: if things are unknowable there is no point in entering into further discussion. After all, unknowability and nothingness have much in common. So ‘Blurry God’ as I shall dub this ineffable creature won’t let the religious off the hook. Nice try Don Cupitt, Paul Tillich and the rest, but it must be Omnigod or nothing.

But boy, oh boy is Omnigod on thin ice these days! When he was the idol of the desert tribes his fiefdom was restricted to the sun, the moon and pancake earth. The size of real estate a god worth his salt could manage. But, it turns out, the acreage has grown. Let me give you two remarkable statistics: there are more stars in the universe than there are grains of sand on all the beaches of the earth. And more staggering still: light from the exploding star GRB 090423 has taken 13 billion years travelling at the speed of light to reach us. (To give you an idea of the magnitude of 13 billion you would not reach that number if you counted uninterruptedly for more than 400 years). Bearing in mind that a single light-year represents a distance of 6000 billion miles this would tend to hint at the insignificance of our otherwise so self-important little planet earth.

Within this mind-numbingly huge universe there must be many other civilisations that would demand God’s undivided attention. Think of the trillions of prayers that must be answered or arbitrarily ignored; and if you are a football fan think of the all the wonderful goals scored with God’s help on all the pitches in the galaxies. The theologians have the answer (if they don’t they always make one up): God is Omnipotent and moves in mysterious ways. But so does Santa Claus in his annual toy deliveries. For centuries men of God have been explaining the unknowable in terms of the not worth knowing. There is a choice here: resort to increasingly contorted explanations or simply conclude that God is imaginary.

Omnigod’s biggest bugbear of course is the problem of evil. For human induced catastrophes such as murder, mayhem and war, Omnigod’s apologists think they have found a clever get out clause: free will, it’s the people’s fault, God is off the hook. This expedient may be sufficient to mollify the unthinking flock but cuts no ice with rationalists, who are in the habit of thinking things through. The free will idea goes as follows: God is in charge of the boardroom decisions while we, the minions on the shop floor, may decide the petty detail. If we get it wrong we must carry the can because God is too busy with the bigger picture. But this convenient division of responsibility must have its limits. There must be a point where certain misdemeanours by the workers are of such a magnitude that they endanger the corporation’s survival and can no longer be ignored by the MD. Free will and Omnigod’s overall control are mutually exclusive. If Omnigod allows the Germans the free will to vote for Hitler and he also allows Hitler the free will to murder six million Jews, then Hitler is running the show and Omnigod is a cowardly bystander pretending not to notice. Would it not have been the decent thing to zap Adolf with a heart attack?

To crank this up a little further I have devised the ultimate freewill test. Suppose a deluded Ayatollah, wishing to meet his 72 virgins in paradise or an Armageddon-crazed redneck fundamentalist, hoping to be raptured soon, managed to get hold of an arsenal of nuclear weapons and employed his acolytes to plant devices in all population centres of the world and that all the bombs were connected by mobile phone signals to his hideout, where he is sitting with his finger poised over the button. Ready to blow God’s beautiful creation to smithereens. (a fanciful scenario I admit, but you get my drift). The ultimate moment of truth. Would God strike him dead or would he have to shrug his shoulders and say: “well, I have granted this person free will – do your worst; no exceptions to my scheme, nothing I can do about it”? At that point theologians must stop waffling and make up their mind. Either they must say that God would act to stop the earth’s destruction or they must allow that a mere human being has become more powerful than God. If, as I suspect, they would argue that God would act, they would have to face the follow-up question: if he can act now, why not in Auschwitz, why not in Dunblane? Why not in thousands of other dreadful scenes of human suffering? And if God cannot or will not act, where is the justification for all the centuries of worship and prayer?

Tony Akkersmans is the author of Happily Godless: Humanism for a Better World, which is available to buy on Amazon.