Cutting Edge Consortium founder Maria Exall writes about the impact of faith-based homophobia on lesbian, gay, bisexual, and transgender people in this country and around the world. 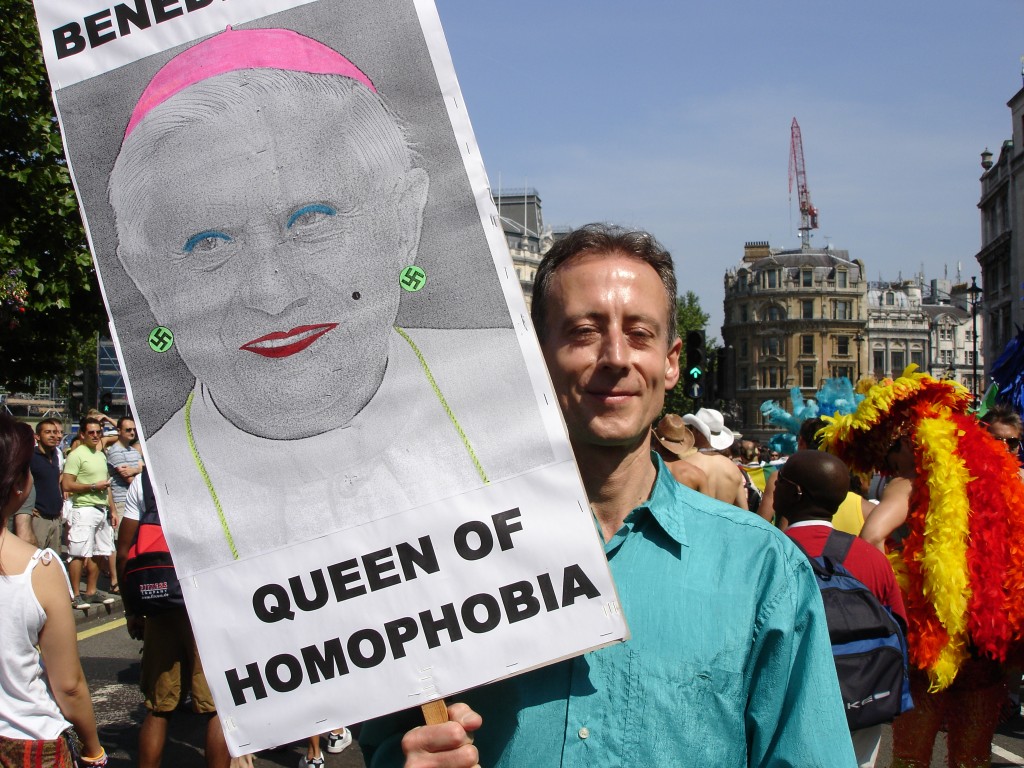 For lesbian, gay, bisexual, and transgender people of faith, official Church teaching on sexuality and gender identity is cruel. Despite the welcome tolerant stance of Pope Francis at the recent Synod on the Family in Rome and the increasingly warm words from Archbishop Justin Welby, there is a long way to go before the diversity of sexuality and gender is promoted by religious leaders as a positive aspect of human life.

Despite the development of a progressive consensus on LGBT rights over the past two decades in the UK, the leadership of the vast majority of the Churches are islands of continuing prejudice, with some honourable exceptions including the Quakers and Unitarians. Such positions are not, of course, the sole prerogative of Christian leaderships. They are often reflected in the kind of violent statements and actions which have emanated from some Muslim and Orthodox Jewish leaders and organisations, but the situation in the Christian Churches is a source of continuing concern.

Church leaders in the UK could speak out in their worldwide communions for more tolerance, but they have remained quiet when anti-homosexual legislation was introduced in Nigeria, Uganda, and Russia, and they fail to stand up for LGBT asylum seekers when they are treated disgracefully by the UK Border Authority. And it should not be forgotten that the leadership of the Anglican Churches, the Roman Catholic Church, the Evangelical Alliance, and many other Christian organizations opposed at every stage the comprehensive equality legislation on sexual orientation and gender identity brought in by UK Governments over the past two decades.

Now however there appears to be a heeding of the ‘sign of the times’. There is a real possibility of a shift towards a pastoral approach that embraces the principle of the dignity of the human person in both the Anglican and Roman Catholic Churches, the most numerous Christian denominations in the UK. But that very possibility has fired up the increasingly desperate opposition. In an attempt to stem the liberal tide they are now focused on disciplining their clergy and theologians.

The situation of Jeremy Pemberton, the Anglican priest denied a license to practice as a hospital chaplain by his Bishop because he is married to another man, is the most recent sign of this. And there is no evidence this paranoia will end in the near future with the withdrawal of Reform, the inappropriately named conservative grouping, from the internal Anglican talks on homosexuality.

In the Roman Catholic Church, the theologian Tina Beattie has been banned from speaking in church premises by the Diocese of Edinburgh due to her support for the right of Catholics to vote for same-sex marriage legislation.

But the homophobic and transphobic stance of these Church leaders is not supported by the majority of lay Christians — the faithful have moved on. As the work of Linda Woodhead and others has shown, Christians in the UK overwhelmingly accept the diversity of human sexuality and gender identity in our society with the views of older churchgoers and those with conservative evangelical theologies the only significant variance.

LGBT people of faith deserve the blessing of their churches for their loving relationships and their rainbow families. The eventual acceptance of LGBT equality by the Christian Churches will be a step change in fighting homophobia and transphobia in the UK and will help in the struggle for LGBT rights worldwide. This fight for tolerance within religion is a fight we all have to win.

Maria Exall is founder member of the Cutting Edge Consortium, an alliance of LGBT faith groups, humanists, trade unionists, and community activists all campaigning against faith-based homophobia and transphobia.