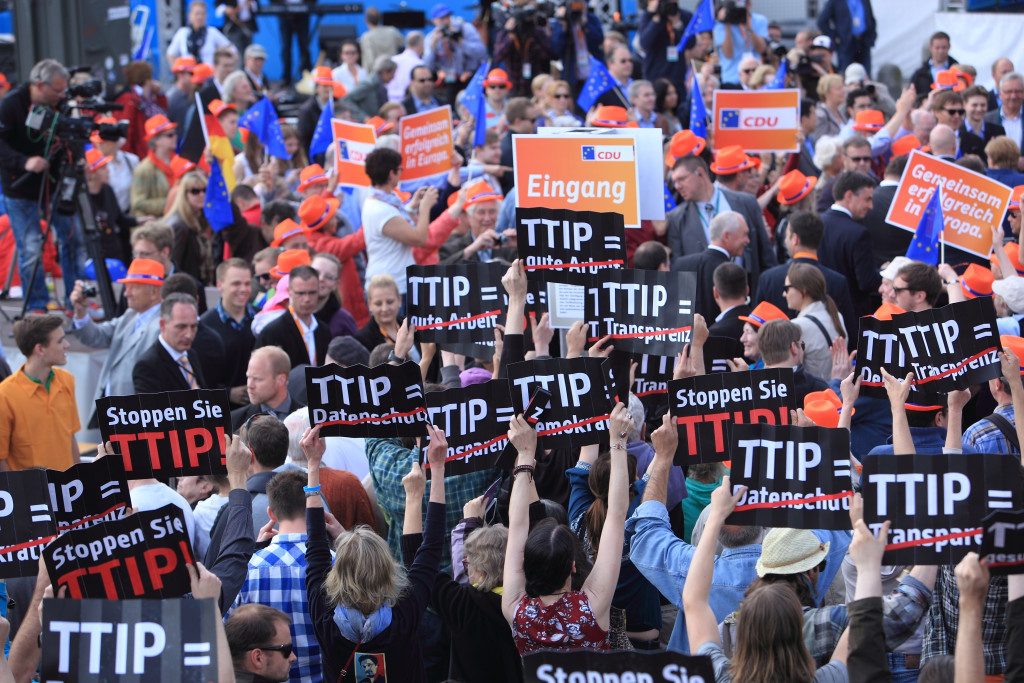 An anti-TTIP flashmob in Hamburg, Germany.

TTIP, the Transatlantic Trade and Investment Partnership, sounds pretty dull, doesn’t it? I had to force myself to take an interest and read up on TTIP (pronounced ‘T-tip’) when a friend in the local World Justice Movement group persuaded me to organise a small delegation to my MP late last year. Even though I was merely the channel to a local MP and others in the group would do most of the talking, I thought it would be embarrassing to introduce a topic about which I knew little or nothing. So I did some homework.

And like most people who read up about TTIP, apparently the world’s biggest ever trade deal, I became increasingly concerned. It’s not that there is anything intrinsically wrong with removing tariffs and freeing up trade between the USA and the EU, which is the main purpose of TTIP. On the whole, with the exception of a few developing industries in a few developing countries, protectionism does not seem like a good or necessary thing. But ‘harmonisation’ of regulations and standards, another aim of TTIP, could be a thoroughly bad thing, depending on whether this raised standards or reduced them – and, as the negotiations seem to be dominated by large corporations and their requirements, one can guess which way that will go.

I use words like ‘seem’ and ‘guess’ advisedly, as another concern about the TTIP negotiations is their secrecy, the lack of opportunity for proper democratic scrutiny, and the haste with which some supporters want to push through the deal – though, fortunately for democracy, the negotiations seem to be proceeding at glacial speed.

Our December meeting with my MP, Zac Goldsmith, went well. He, like many others, had found that the more he learnt about TTIP the more concerned he became – and he is keen to get other MPs (of all parties) interested and concerned.  Since then, I have emailed all my (London) MEPs and received a couple of replies – one from a UKIP MEP who opposes the TTIP and a thoughtful response from a Conservative MEP, Syed Kamall, who supports it and has written about it for The Huffington Post here and here.  It could be, as Syed Kamall suggests, that there is some exaggeration and scaremongering on the anti-TTIP side. It has been called by the World Justice Movement ‘the most dangerous free trade deal in a decade, [which] threatens democracy, public services and the environment.’  But if this ‘scaremongering’ is provoking debate and calls for openness and scrutiny it might not be a bad thing.

For TTIP does now seem to be emerging from the shadows, with increasing interest from MPs and the media. In January, backbench MPs initiated a debate on the motion: ‘That this House believes that the Transatlantic Trade and Investment Partnership and any associated investor-state dispute settlement provisions should be subject to scrutiny in the European Parliament and the UK Parliament’ (Hansard report here). Business Secretary Vince Cable and the Liberal Democrats seem to be pulling back on TTIP, perhaps as part of a pre-election distancing from the Tories and the Coalition. There was some speculation that the sudden government rush to legislate for plain cigarette packaging was at least partly because it could become much more difficult post-TTIP. And there was also a useful half-hour discussion on Radio 4’s In Business programme in January.

So the discussion does seem to be hotting up, and that’s an achievement for the charities and pressure groups that have been campaigning on TTIP. However, it often seems as if the different sides are talking about different things, and what one thinks about TTIP does depend on one’s personal priorities and preferences: a boost for economic growth and businesses versus protections for consumers and national rights to regulate corporations.

Like many of the issues highlighted by Humanists for a Better World, TTIP is not a core BHA policy concern, and it’s certainly not an exclusively or particularly humanist issue – it’s one for all active citizens. At the very least, thoughtful voters should ask questions about TTIP and try to persuade our democratically elected representatives to take an interest in it and insist on transparency and opportunities to scrutinise and amend the treaty before it’s a done deal. If you’d like to know more about TTIP or take action on it, do please have a look at H4BW’s December 2014 briefing on TTIP.

Marilyn was education officer of the BHA from 1998 - 2006, and is now volunteer co-ordinator of Humanists for a Better World.