Ben Greenhalgh justifies our fascination with stories on the small screen. 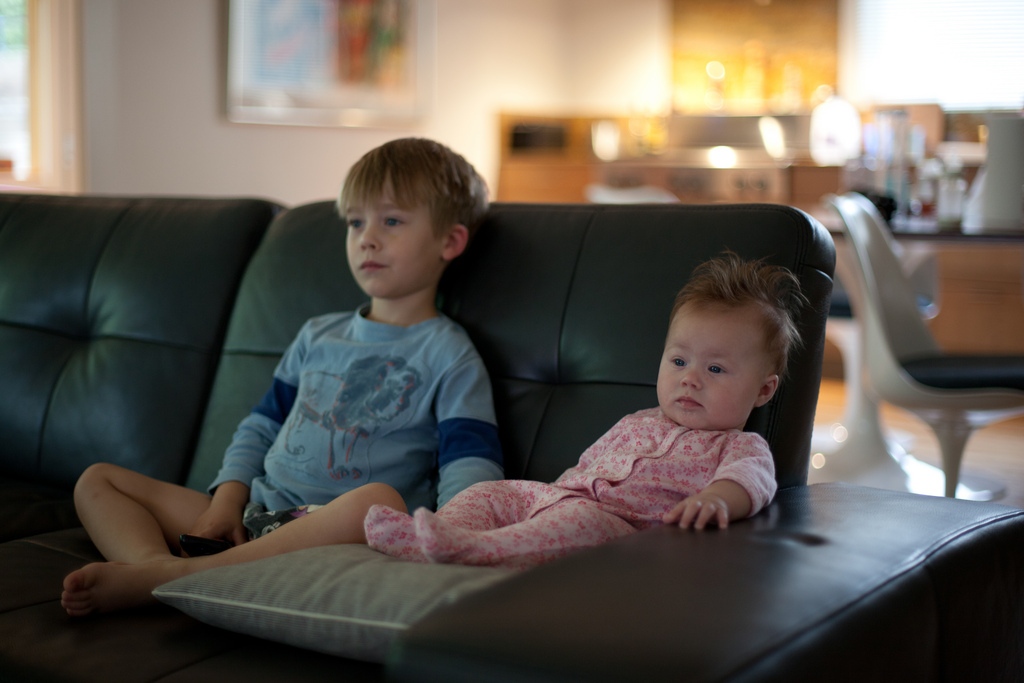 Do you suffer from TV addiction? Photo: Lars Ploughmann

The door creaks open and you emerge, still grasping the duvet that you have failed to part from for days. It’s stained, ridden with crumbs and stinks like stale beer. With your square eyed comrades following cautiously behind you, your eyes strain to adjust to the new world.  Your legs are weak from lack of use, your bladder exhausted from putting off trips to the toilet at important plot points. Your mouth is dry, and you’ve forgotten how to speak for the first few seconds until you utter the catch phrase of a generation: “I can’t wait for the next one!”

These symptoms point to a clear diagnosis of series addiction. It’s contagious to say the least; yet, I happily get infected.

There can be no doubt that we are a nation that loves our TV. Conversations surrounding certain well known shows frequently make their way into the social symposium. So much so, a recent study by Sky Atlantic showed the pressure to be in the know with the latest must-see shows, or keep up with the workplace chat that surrounds them, has led to millions of people faking their way through conversations rather than be seen to be out of the loop. This to me is fantastic. People want to share the storytelling experience with others, and it couldn’t come at a better time.

There are of course those who lambast such reliance upon screens: ‘Watching too much TV and films is a waste of valuable time: a slovenly and hedonistic pursuit with little merit!’ They shout that our brains will turn to mush, we will fail to form real social relationships, forget how to read, how to write, and will eventually become puddles of inanimate pointlessness. Personally, I think such people watch too much science fiction.

Although the written word will always maintain its pride of place beside humanity as the most powerful form of artistry, time changes: books have become just a part of our vast entertainment culture. Being in front of the box is a fundamental piece of our pleasure palate, and, if supplied with enough crisps and sweets, we can devour episodes and films with equal zeal, because, at the heart of each show or episode, is our human thirst for story.

Our need for story is seemingly inherent within our very biology: even when we dream we tell stories to ourselves. The reason is summed up beautifully by critic Kenneth Burke: ‘stories are equipment for living’.

As a species, we should constantly be questioning things, especially that of established norm. We need to persistently reinvent, challenge and adapt in order to better ourselves and the society we choose to create for ourselves and others.  Arguably, the most important question we ask ourselves towards this end was posed in Aristotle’s ‘Ethics’: how should a person live their life?

The factual answer eludes us of course, somehow hidden behind the wildfires of life where we find ourselves in a constant struggle to match our means with our dreams. Traditionally, humankind has made it the task of wisdom in the forms of philosophy, science, religion, and art to answer this ultimate question. Instead of coming up with answers, we have taken parts of each to bolster and create a liveable meaning, often resulting in conflict through disagreements on how much of each wisdom plays a role in forming just societies. I can think of one in particular. However, as our reliance upon this traditional wisdom diminishes, we continue to look to a source we still believe in, the art of story; the art of learning from the collective experience of humanity.

The best shows do not simply deal with entertaining us. Entertainment and enjoyment comes from our understanding of the characters, our empathy with them and their choices within the events of the story. We condemn and support these choices: actively discuss them with others as a way of learning about, not only our own moral outlook, but others as well. We learn from the characters’ mistakes and successes, we follow them through their trials and see them emerge on the other side failed or triumphant, mirroring our own transformation once the drama has ended.

Stories, whatever their medium, aren’t simply a flight from reality as some believe them to be; they are vehicles carrying us along in our search for reality so we are better equipped to make sense of the chaos of life.

Stories are finding explosive growth in modern society, and within series alone, that many of us follow dutifully,  we are offered a communal way of understanding parts of the human experience aside from shrinking dogmatic ideology that once acted alone to create meaningful existence. The more we watch and question these tales as a society, the more we question the world around us.

So, when you eventually crawl out from some dark hole after a 10-hour binge of The Walking Dead, think of it more as a philosophical lesson: an entertaining debate into your own power as an individual, and a closer understanding of the trials and tribulations of that individual within society.  Have a shower and some proper food though; that’s good for you too.