Anna Beniermann discusses the new ShineonHu humanist art project coinciding with the 50th anniversary of the Happy Human, the international symbol of Humanism. 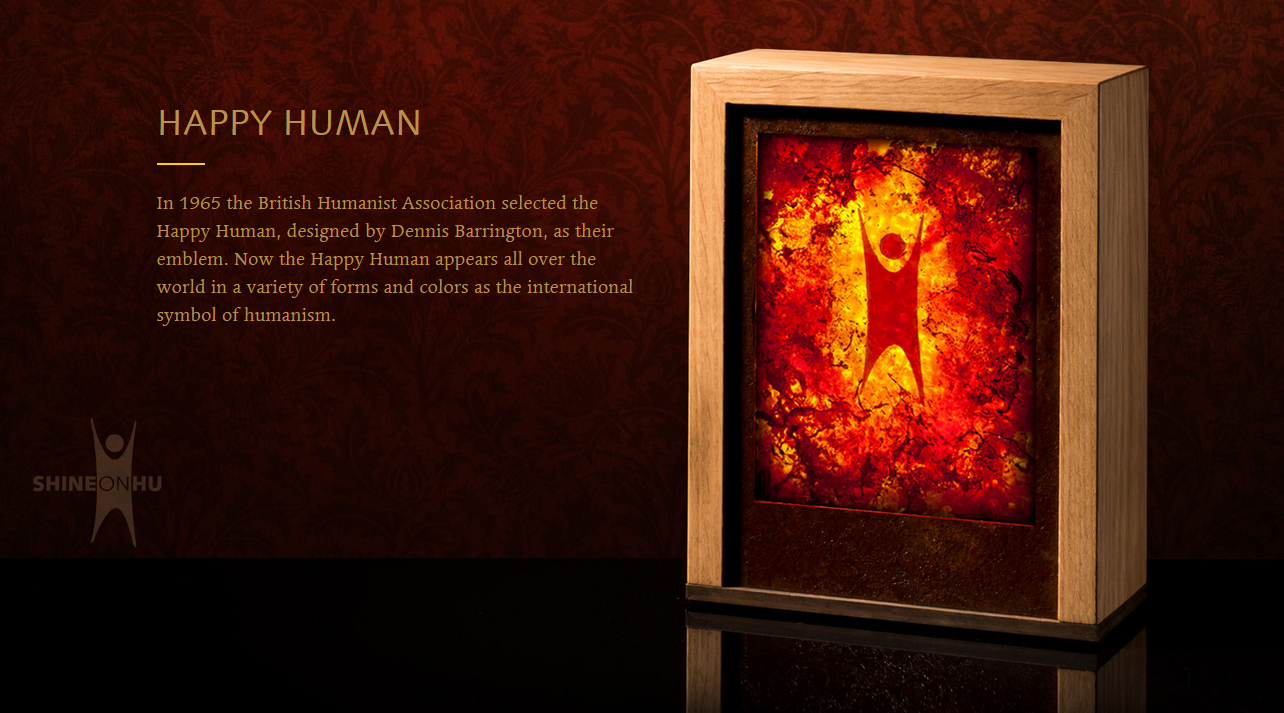 A screencap from ShineonHu.com, spotlighting the BHA origins of the Happy Human symbol

Out of the darkness a warm light – streaks of yellow, orange and red – like flickering flames, flowing lava or glowing embers. Amidst the gleaming flames the red figure of a person stretching their arms up high. The Happy Human, the international symbol of the humanistic organisations, stands on a most aesthetic centre stage. Several carefully positioned layers of painted glass create a three-dimensional setting with a spatial effect that a picture cannot capture. Standing before one of these works, the viewer becomes enmeshed in the depth of light that shines through symbols of peace and human rights.

ShineonHu is an art project that puts the practice of Humanism in focus. The creative and technical mind behind ShineonHu is the designer and visual artist Pete Stary. For over three years the humanist has been producing illuminated objects of art in his own atelier. Gradually the idea developed that rather than decorative forms he could set meaningful symbols in the steel and between the layers of glass.  ‘My way of working makes it possible to combine the pieces with a message that reflects a worldly philosophy important to me personally.’

Floating in some of the lights is the delicate tracing of a pair of glasses.  Below them stands the caption OneDollarGlasses. The OneDollarGlasses is an idea of the German teacher Martin Aufmuth by which impoverished people anywhere in the world should be able to afford a pair of glasses and thus be able to work and provide for their families. All those projects that offer practical aid from and for human beings to make the world a better place belong on the stage that Stary has set with his light art:

‘Just like onedollarglasses.de, theoceancleanup.com or aliteroflight.org there are hundreds of other such vitally important projects that are all based on the same equations: On good people with a great character who use their intelligence, creativity and gumption to make others aware of injustices that should be removed. People who offer solutions – unconventional, idealistic, original. These ideas I want to gather. I want to point them out. Projects like these should not be just projects. They should represent the standard of an enlightened individual.

‘I can’t do anything near the same as these people who have launched these three immensely valuable projects. But I could perhaps produce works that raise awareness of such efforts and encourage a new way of looking at things.’

Each light sculpture in the art project ShineonHu is a unique work of hand-painted glass. They are all delivered with an integrated USB flash drive that can be inserted in a steel backing. The drive contains a collection of texts, pictures, videos of exactly those world-wide projects that direct us in the “right direction”; these can also be found on the webpage of shineonhu.com. The collection is expected to expand continually, not only through the cooperation of people who refer relevant themes to the art project.

‘I want to be able to expect more from mankind.’

These light sculptures are an appeal, both emotional and intellectual – an appeal to the voice of humanity and reason: ‘I am furious with the human species. We would be capable of so immensely much more if we could only learn to live together. If we finally respected life itself in all its aspects. Life, ourselves, this planet.’

Voicing criticism on religious or political systems and structures is an important thing to do; however, criticism alone does not enable us to act. Practice-oriented Humanism requires us to become conscious of the human situation in each individual and to recognise that there are some fundamental flaws out there. The purpose is not to establish utopias or regulate behaviour, but to perceive that genuine alternatives already exist which each and every person can engage in. To present possible fields of action, to become a sounding board where future-oriented ideas and goals can be shared with one another and sent out into the world – that is what this artist wishes to do.

‘I’m not able to love my great-great grandchildren because I don’t know them. But I do know that I love my child. And I know that my child will love its child. And that one, again, will love its child. And this in turn its own. And here we stand in this chain, which represents a positive reality for each of us, and let everything go to shambles because we’re too simple-minded to communicate and because we simply don’t feel like thinking things over, or, we don’t give those minds that definitely are capable of thought a platform so that we can listen to them. Hans Rosling, for example, is a person who presents solutions and it’s shameful how few even know who he is.’

In their uniqueness and beauty the humanistic lights capture attention. They provide an opening for conversations on sensible topics that might otherwise never be touched upon. Stary’s hand-made illuminated sculptures illustrate the central message of compassion with such clarity, depth and beauty that they raise hope for change. Perhaps their warmth can motivate some people to stand up and resist what can often be a cold reality.

‘I have this crazy idea that with the right blend of a good heart and healthy dose of common sense you could set a few things in this world off in the right direction.
—Pete Stary