David Pollock is a trustee of the British Humanist Association, the former president of the European Humanist Federation, and the former chair of the Rationalist Association which publishes the magazine New Humanist. He blogs in a personal capacity.

This blog is part of a series of perspectives on the EU referendum from prominent humanists on either side of the debate. Each puts forward a humanist case for the United Kingdom either remaining a member of, or leaving, the European Union. All six perspectives are linked in the image below.

David Pollock: The EU is an invaluable venture in pooling sovereignty in a shrinking world

The referendum campaign is immensely depressing for many reasons.  For one, the two sides are merely shouting at each other, not engaging.  For another, when all the best qualified institutions and experts agree that leaving the EU would be economically damaging, the Brexiteers respond only by invoking a corrosive and irrational distrust of experts, emulating the worst ways of conspiracy theorists.  Moreover, their ramshackle coalition of rackety discontents from across the political spectrum cannot agree on any alternative economic policy, flinging out as many unformulated ideas as they have ways of spending the cash putatively saved by quitting.   On the other side the Remain campaign has so far failed to respond to people’s worries about immigration: indeed, they are now reaping the whirlwind many of them had previously sown in their distorted and one-sided presentation of immigrants as scroungers and health tourists.

Sadly the EU has for decades been subject to a campaign of systematic distortion and lies in the proprietor-owned press.  Even the BBC, in the interest of balance, is now presenting a distorted picture, reporting equally the lies of the Brexiteers (‘£350 million a week for the NHS’) and the sober warnings of the Institute of Fiscal Studies.

The issues are far too important to be so demeaned.  The EU is an invaluable venture in pooling sovereignty in a shrinking world.  So far from representing a surrender, it offers Britain, with its mature democracy and pragmatic politics, a platform for wider international influence.  It is undoubtedly imperfect (as in our own sphere the history of the European Humanist Federation’s engagement under Article 17 of the Lisbon Treaty shows) but in its espoused principles and standards (and devices such as its Ombudsman who in that case found for the EHF over the Commission) it contains the mechanisms for self-correction.

Indeed, the EU offers great promise for the future: it deserves commitment, not sabotage.  The hated Brussels bureaucrats are the servants of the Council of Ministers, doing the will of governments and subject to their control.  Just as our own Parliament had to fight over centuries for its powers, so the European Parliament is demanding – and gaining – more influence and powers.  Already EU regulations – collaboratively adopted by all EU members – are improving our own standards in (for example) workers’ rights and environmental protection, providing a collaborative bulwark against big business’s devotion to short-term profit that individual nations are increasingly powerless to resist.  It is the EU that is standing up to US-based multinationals over taxation, privacy and monopoly power.  The EU’s Charter of Fundamental Rights and the associated agency are valuable backing for the Council of Europe’s Convention on Human Rights.  Its freedom of movement may bring low-paid eastern European migrants here – largely to do jobs that no-one else will take – but it is a huge benefit for those who remember queues and delays at endless national frontiers and a necessary corollary of the freedom of trade that boosts business efficiency and the prosperity of us all.

The EU was a great promoter of human rights and rule of law in eastern Europe, setting standards that candidate member states had to meet and maintain.  The narrow nationalism of the Brexiteers, however, lends comfort to their confrères in unsavoury populist parties such as are now in power in Poland and Hungary and their even more dubious allies in neo-fascist and similar parties in France, Austria, Germany and elsewhere.  These also play on anti-EU nationalism and atavistic appeals to past greatness.  The way to resist such dangerous trends – and they are genuinely dangerous – is not to pander to them by walking away and so weakening the democratic forces in the EU: it is to stand up to them and engage in the argument, advancing cooperative internationalism rather than putting up the shutters and ushering in another age of unconstrained nationalistic rivalries.  As so often, it is hard work, not extravagant gestures, that are needed.

No human institution is without fault, and the EU is obviously no exception, but it is a strong force for good and well worth defending in this referendum campaign and then reforming from the inside rather than petulantly quitting and pouring scorn on it powerlessly from afar.

Several lessons can be drawn from the so-called ‘Trojan Horse’ affair, including

…which must raise questions about faith schools: what is so different about a narrow Jewish or Catholic ethos and curriculum from what devout Muslim governors were trying (admittedly unlawfully) to impose on their Birmingham schools?Politicians like Liam Byrne use this last point to argue that maybe these schools should be converted to faith schools so as to legitimise what they are doing: one moment what Park View school does is deplorable, the next it is spot on.  But this reminds us that the whole debate about faith schools is marked with dishonesty by their defenders. 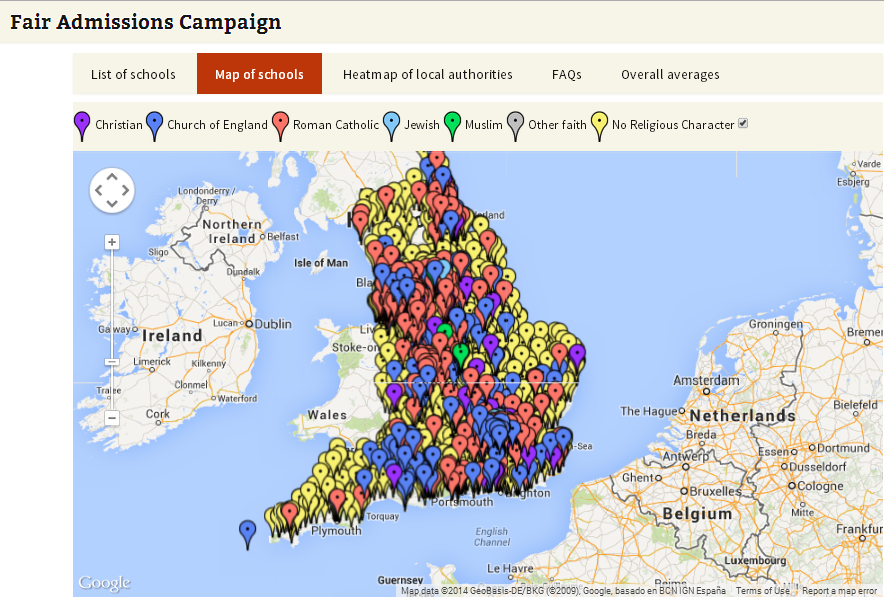 The research is clear – ‘faith’ schools are more socio-economically compared to the local average. Pictured: the Fair Admissions Campaign website.

When the Fair Admissions Campaign shows indisputably that religious schools discriminate in their admissions against poorer families (as measured by eligibility for free school meals), the Catholic Education Service uses phony stats to fend off the criticism.  When the BHA tweets that if people are worried about the intense religiosity of the Birmingham schools, they should pay attention also to faith schools, the Church of England’s PR man the Rev Arun Arora treats this one tweet as the sum of BHA policy and writes a column ridiculing us, whereupon friendly columnists echo him in their own names.

The Church of England in public defends its schools with a pretence of selfless service to the general interest while in private  pursuing an aggressively expansionist policy as its last hope for survival, using the bait of places in its schools to induce parents into church.

But these sponsors of religious schools paid for from the public purse and the politicians who defend them are guilty also on another count: their refusal to engage with the arguments of principle in favour of reform.

In this they differ from many proponents of Jewish or Islamic schools – before learning to be more circumspect, Ibrahim Lawson said on Radio 4 that the purpose of his Nottingham school was indoctrination. The churches do not admit that their real aim is to recruit a new generation to join their congregations. That they enjoy limited success, that some Anglican schools are largely full of pupils from Muslim families, that they often provide a good education, that their version of indoctrination is subtle and muted – these are mitigations but not answers to the principled objection to faith schools that they do not respect the autonomy of children and their own rights under the Convention on the Rights of the Child to freedom of thought, conscience and religion.

Defenders quote against this the European Convention on Human Rights that ‘the State shall respect the right of parents to ensure such education and teaching in conformity with their own religions and philosophical convictions” —  and this is indeed a necessary defence against an over-mighty state imposing a totalitarian education on everyone.  But the Convention does not help them: it protects the private or joint endeavours of parents but it does not require the general public to finance churches in their self-promotion.

Nor do the churches face up to the implications of public finance for denominational schools in an age of human rights and non-discrimination.  If Catholic schools, why not Muslim and Hindu?  If Anglican, why not Buddhist and Sikh?  or Seventh Day Adventist? or schools to propagate the teachings of the Maharishi Mahesh Yogi?  Or indeed Steiner schools based on their founder’s racist and anti-science writings?  All these now feature in the publicly funded school system.  Supporters of Church of England schools now have to defend also these more dubious enterprises.

But our arguments of principle go beyond objecting to indoctrination of children. These schools are inevitably divisive, and they increasingly balkanise the population.  They are a relic of the sort of divisive multiculturalism that was such a mistake of the Blair government.  Time and again it has been shown that it is necessary only to divide people into groups for them to form loyalties and hostilities, and when the divisions are based on rival religious claims they are all the more dangerous.  It is no answer that these divisive schools have occasional visits to each other – children need to be educated alongside each other every day, to learn about and from each other, not to be thrown into occasional artificial encounters.

But do not expect the churches to provide a defence on principle of religious schools any time soon.