Five days shalt thou labour, as the Bible says. The seventh day is the Lord thy God’s. The sixth day is for football.
– Anthony Burgess 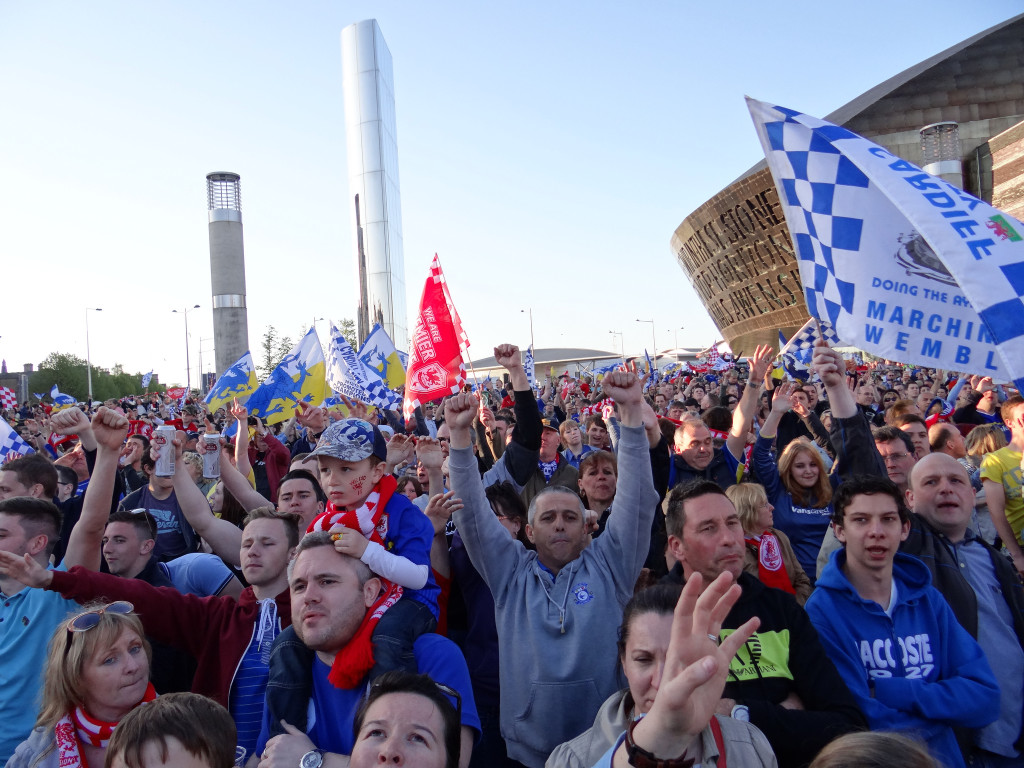 For many fans of the ‘beautiful game’, football isn’t just a sport, it’s a way of life. Photo: Jon Candy.

I am sure you have felt it too, that feeling of the numinous and the transcendent? Perhaps you feel this way when you gaze up into the night sky? Perhaps when you solve an extremely difficult mathematical question? Maybe when you step into a museum? I hazard that at some point in your life the hairs on the back of your neck have risen at moments such as these. As a humanist I am often told that this experience is solely a religious one. If that is true, I and millions of other secular humanists must therefore confess that we too are religious. Football is my religion and it may also be yours.

Perhaps you are a football fan, but do not share this view? Let me convince you. 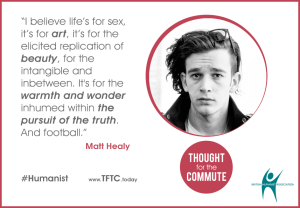 The 1795 singer, young humanist, and BHA Patron Matt Healy equates football with ‘the warmth and wonder inhumed within the pursuit of the truth’.

Supporting a football club has a lot in common with adopting a religious faith. As with religion, once you have chosen a football club you instantly become a part of that community; a community which may more accurately be described as a tribe. I wager any person who doubts this comparison ought to attend a football match and witness the fervour, the chants and the rivalry, not between opposing football teams but between opposing fans. To witness the shared, very public grief felt by football fans whose team has just been relegated or that has just lost in the cup final, is comparable only to the faithful on St. Peters Square upon the death of a Pope. In the face of oppression, as with religion, football can bring a community together. Often the most fundamental of football fans are those who have suffered the most because of their emotional attachment to their clubs. This suffering, like all suffering, can inspire hope in even the darkest of times.

Football tribalism induces a passion in people not seen since the days when the Church ruled medieval Europe. To this day historians debate the reasons why thirty thousand people suddenly left behind their homes and their families and migrated to the Near East. The general consensus is that religious tribalism in these people invoked such strong feelings of passion that they were compelled to migrate because of the calling of Christ. This migration is called the First Crusade. We may think that we are far removed from the days of Church ruled Europe. We would be wrong. Each week millions of people across the world travel hundreds, sometimes thousands of miles to watch a football game. For these people football is their ‘religion’.

“Each week millions of people across the world travel hundreds, sometimes thousands of miles to watch a football game. For these people football is their ‘religion’.”

These dedicated fans do it because they have an emotional attachment to their team. They cry when they lose, and feel delirious when they win. Football like religion is about hoping your team you have chosen to support will win. The difference with religion in this case is that the winning in a religious sense only takes place after your own demise. Religious people hope that their faith is the one true faith. They cannot all be correct, that would be absurd just as absurd as two opposing football teams each winning in the cup final.

Football possesses many of the virtues of religion and I have only outlined three, but naturally it also embraces many of the vices too. With tribalism comes violence and hatred, with losing feelings of despair and emptiness. Football is religion for humanists but what I would also say is that football encapsulates the very humanity of sport. I feel that it is for this reason why in all our millions we go to such great lengths to watch those twenty two people kicking a ball of compressed air for ninety minutes across a green field. It is the drama of a last minute goal that wins you the league, or the beauty of seeing Lionel Messi come closer to the divine than any other human that has ever lived. It is the sportsmanship too: how can we forget that tragic day that Fabrice Muamba’s life was saved by a heart surgeon sitting in the home stand who rushed onto the pitch to rescue an opposing player?

Football can be like a religion to humanists, I say, but it is also so much more. Football is a celebration of humanity. As with any celebration often there are those who work tirelessly behind the scenes to ensure that humanity can be celebrated. Perhaps you wish to be one of these people? If so, then the Young Humanists are for you. I look forward to seeing you at one of their excellent launch parties very soon!

In the sweep of its appeal, its ability to touch every corner of humanity, football is the only game that needed to be invented.
– Bobby Charlton

Young Humanists is the 18-35s section of the British Humanist Association. Find out more about what they do and how to get involved at younghumanists.org.uk.