The 2015 general election on 7 May looks closer than ever and contentious issues around religion are clear political skirmishing grounds. In light of this, should churches still house ballot boxes? The research suggests not, argues Adam Coomer. 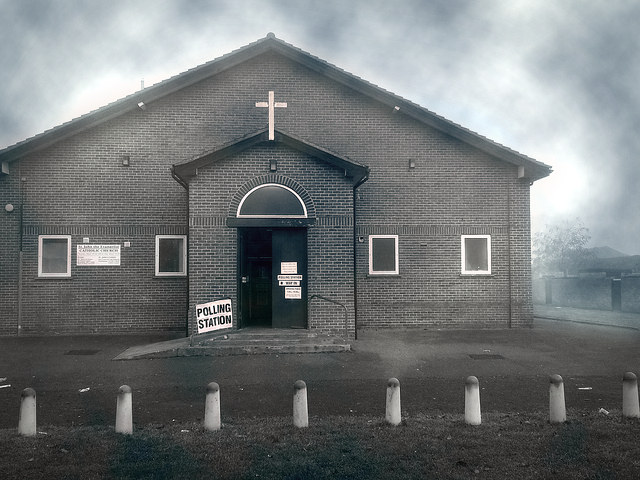 Bunting hung and the airwaves crowded with opinion, prediction, and analysis. Television schedules adjusted. Bus-loads of young men and women wearing tribal colours. If you’re reading this post from an archive then you might think that I’m referring to the World Cup, but I’m actually referring to the 2015 general election campaign.

Many of us will by now have received polling cards advising those of us not making use of postal voting of where we need to attend on 7 May. Many of these locations will be churches. (The first draft of this post actually read ‘places of worship’, although I was unable to find any examples of non-Christian facilities being used). As issues to do with how religion should intersect with public life become more relevant to politicians and to the electorate, it may be time to reconsider whether houses of faith are suitable for this purpose.

In the life of the current Parliament, major debates have taken place regarding same-sex marriage, immigration, and the future of the House of Lords, where to do this day 26 Church of England bishops hold reserves seats by right of being clergy. In February, a collection of influential Anglican figures published an open letter proclaiming it to be ‘the duty of every Christian adult to vote’. This will not represent the view of every Anglican (let alone every Christian) any more than will the declaration by controversial Muslim cleric Anjem Choudary that voting is ‘sinful’ under Islamic law (accompanied by frigidly uncreative hashtag #StayMuslimDontVote). The clear point is that both religious issues and groups are significantly in play as polling day approaches. It can hardly assist those in disagreement with Choudary that some undecided Muslim voters will inevitably receive, as I did last week, polling cards instructing them to attend a local Christian church. This less speaks than mumbles of inclusive democracy.

Polling in religious buildings potentially risks alienating those of other faiths (and none), but this is only one aspect. A second and better examined question is whether polling location can actually influence how a voter marks their ballot. Social scientists and marketers well understand that human behaviour, choice and attitude can be influenced by the unconscious influence of the environment: a phenomenon known as priming. This occurs because the stimuli in question act on the subconscious and promote the access of closely associate memories and, as such, the effects tend to be unpredictable and unique to each individual. In the constitutionally secular United States, there has been a renewed enthusiasm for investigating these influences on voting decisions since the controversially close Presidential election of 2000.

Election outcomes have been shown to be influenced by a wide range of subtle factors, from the design of the ballot paper to the weather conditions on polling day. The first set of studies to look specifically at the influence of polling location were published by Stanford University researchers in 2006. These showed that those voting in schools were more likely to support a tax increase to fund education. Further studies specific to churches were published in 2010 and 2014. The first study suggested that voting in churches may be ‘advantageous to politically conservative candidates and to supporters of conservative positions on abortion, same-sex marriage, and other relevant issues’. However, the latter paper found the inverse, with those voting in churches more likely to support a proposition on same-sex marriage, which the researchers speculatively suggest may be due to negative campaigning on the issue by religious groups. Intriguingly, those voting in schools were also more likely to support marriage equality, whilst voters using municipal buildings (fire and police stations, community halls, and the like) were least in favour. The original Stanford researchers concluded that: ‘The magnitude of the influence of polling location on voting found here would be more than enough to change the outcome of a close election,’ a finding endorsed throughout the literature.

Objection to the use of churches as polling stations need not be based on anti-religious sentiment, but sensibly motivated by a desire for unbiased elections. Evidently, it is not even pre-determined in what manner the church environment might influence the undecided voter, but that there is some effect seems plain. If it is the case that mainly Christian facilities are used – and it seems likely that this is so – then what message does this send to non-Christians? Few are likely to further investigate the topic or understand that the officers selecting such buildings have a broad discretion, rather than compulsion.

As elections become closer and the traditional ‘Westminster henhouse’ becomes more colourful and claustrophobic, we can scarcely afford to be ignorant towards any unconscious influence inherent to the very mechanics of the process. While the perfect polling-day voter is balanced, well researched and pre-decided, they are extremely rare for the same reasons. Many people will attend on 7 May without a clear plan of how to vote – people protected from last-minute influence by exclusions placed on campaigners or materials in the vicinity of the polling station, and by a general prohibition on party-political clothing or paraphernalia on site. All of these rules are seem to be ignorant of that fact that the very room in which the process takes place may have the final say.

Under the parliamentary election rules, acting returning officers have broad discretion over the location of polling venues, with the right to use without charge any premises paid for (partly or fully) out of rates. These include schools and council premises – themselves fraught with problems. Beyond this there seem to be few rules and little guidance. Perhaps, in the circumstances, this should be reconsidered.

Adam Coomer is a member of the BHA’s Young Humanists and postgraduate student with University College London, with particular interests in law, religion and economics. Follow him on Twitter at @AdamMCoomer.