April saw the launch of Goodbye God?, a graphic novel that explores evolution vs creation and calls for an end to the teaching of creationism in schools. Written by me, Sean Michael Wilson, and illustrated by long time luminary of the British comic book world, Hunt Emerson, it’s a 120-page book published by New Internationalist and made with the help of both the British Humanist Association (BHA) and the American Humanist Association (AHA). The book demonstrates how a concern for humanism, science, and reasoned logical thinking is crucial for the development of society. 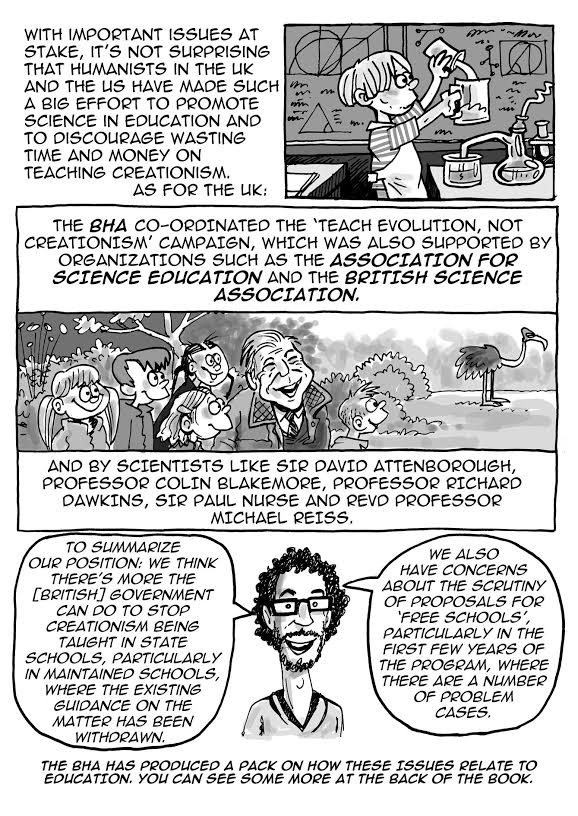 The BHA’s own Richy Thompson is featured as a character in Goodbye God.

What is a graphic novel, I hear you ask? Or perhaps not, as the term, introduced in the late 70s, has become quite well known by now. Essentially its a word coined to get over the image of comics being just for kids. Which they never have been, that was just a silly cliche. And we humanists should be all about overcoming miss-information and cliches, yes? So, in the last 30 years or so the medium of the graphic novel has come to mean comic books for adults. And no, that does not mean pornography! It just means stories using text and visuals, on sophisticated themes, that adult readers can enjoy.

Why do this as a comic book? Well, actually the Goodbye God? book is more like an illustrated guide, rather than a traditional comic book or graphic novel. There are very good reasons to have the illustrated format. In recent years there has been quite a bit of research into how the visual and text mixture we find in comic books is a more effective way of conveying complicated information than text alone. For example,  Kobayashi’s 2011 study in Sophia University concluded that: ‘The findings indicated that the visual aid reduced the learners’ cognitive load in reading and promoted the retention of the text…’ So, comic books, graphic novels, whatever you want to call them are both an enjoyable way of taking in complicated information, and probably a more effective one. 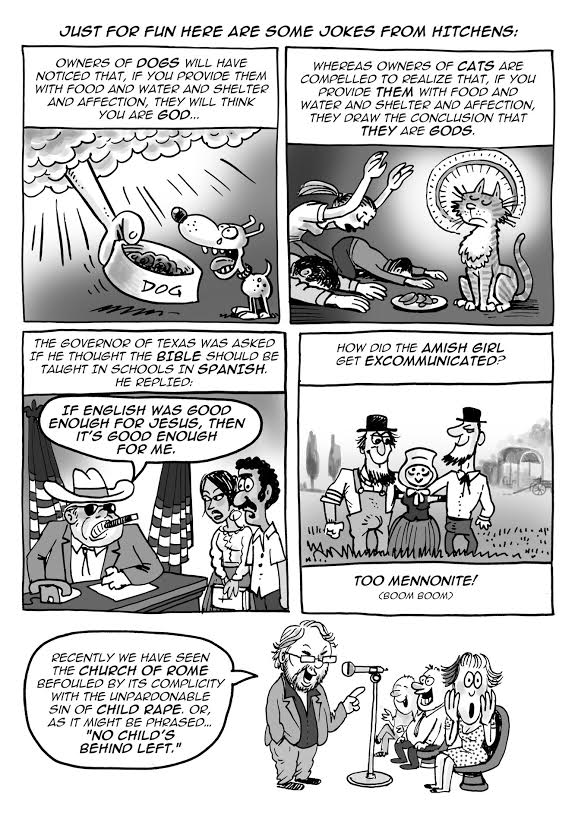 Sean Michael Wilson: What book on critical of religion could be complete without a few appearances from Christopher Hitchens?

In part one of Goodbye God?, we look at creationism vs evolution. We consider some of the key aspects of what both are. We have a list of key claims from creationists and a cartoon version of the BHA’s very own Richy Thompson goes through them, one by one, noting the faults in argument and the mistakes in conclusions.

Later in the chapter Richy also takes us through the situation as regards the teaching of creationism in UK schools and the significant campaigns of the BHA in this area, the successes, but further work that needs to be done in the independent school sector. We also look at the situation in the US education system, with a cartoon Roy Speckhardt, of the AHA, making an appearance, as we consider the twists of terminology of US creationists reframing their approach as ‘intelligent design’ or ‘teaching the debate’.  Philosopher Stephen Law of the University of London and the Centre for Inquiry UK is in chapter one also, as we begin to broaden the focus to look at some of the ways that irrational belief systems are introduced and promoted.

In part two, the book pans out yet further to consider several aspects the negative impact of religion, with several well known humanist’s making an ‘appearance’, in illustrated form, to tell us about various related points. These include Richard Dawkins’ key points from his ‘letter to my daughter’ noting that we should be suspicious of reasons for believing things that rely on mostly on authority, tradition or revelation. We also have Democrat and author Sean Faircloth’s ‘10 points for a secular America’ shown in illustrated format for the first time.

We have some wise words from the BHA Chief Executive, Andrew Copson, regarding the important place played by humanists in the national cultures of the UK and USA. Then, what book on critical of religion could be complete without a few appearances from Christopher Hitchens? In Goodbye God?, we see him complaining about the horrendous idea of ‘compulsory love’ for god, laying down his infamous challenge regarding the question of morals and ethics, and of course, throwing in a few of his jokes! Hitchens, indeed, was keen on graphic novels, having recommended them in a couple of his own books. He also wrote the introduction to Joe Sacco’s graphic novel about the Bosnian war.

The book is designed to mix the serious points with humour, and the excellent illustrations of Hunt Emerson balance up the considerable textual parts with their artistic charm. It also includes back text sections by the BHA and the AHA, telling us more about the kind of work they do, and more about the issue of teaching evolution in schools. We also have an introduction by Professor Lawrence Krauss, who comments there that: ‘If our society is to function at its best, no notions should be sacred, beyond questioning, including religious notions. That is why we need books like Goodbye God? to help expose both religious and scientific nonsense that can get in the way of sound thinking, and to help produce a healthier and happier world with public policies that properly address the challenges of the 21st century. ‘

So, if you are interested in a unique way of presenting various issues of concern to humanism, in a way that is visually appealing yet still sophisticated, check out the Goodbye God? book.  More can be seen at seanmichaelwilson.weebly.com/goodbye-god.html.