Atheist Scout leader Ralph Parlour presents his own personal view on the recent reforms made by the Scout Association and Girlguiding UK. 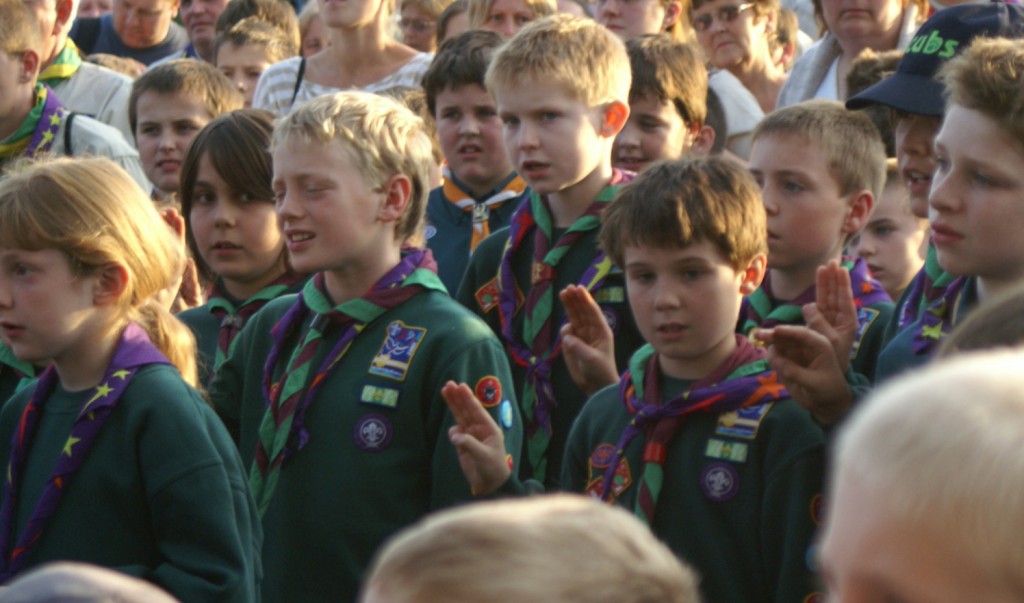 On the 1st of September 2013 and the 1st January 2014, the British Guide and Scout Associations respectively changed their promises, opening both movements to atheists and humanists.

The promise is a central and important aspect of both movements, and all who wish to become members have to make it. The changes made are quite radical given the religious origins of both movements. Before these changes, all guides, irrespective of their own beliefs (or lack thereof) had to promise to ‘love God,’ and scouts had to promise to ‘do my duty to God.’ Even more importantly, the Scout Association has lifted a formal ban on atheists becoming full leaders. Although the ban was not strictly enforced and many atheists like me were already leaders, it is a relief to no longer have to hide my (non-)belief, or to have to ‘cross my fingers’ when making the promise.

Now instead of saying to ‘love God,’ all Guides now promise ‘to be true to myself and develop my beliefs.’ The Scouts however have taken an alternative approach and instead of completely throwing out the old religious oath, they have introduced a new promise that atheists can choose to say instead. ‘To do my duty to God,’ in the revised promise, has been replaced with ‘To uphold our Scout values.’ It is however the case that the religious oath will continue to be the default, so most new members will continue to take the religious oath, while atheists can request the secular alternative.

The Scout Association’s reforms have been widely supported, even by religious figures. Paul Butler, Bishop of Southwell and Nottingham, said that ‘In enabling people of all faiths and none to affirm their beliefs through an additional alternative promise the Scout Movement has demonstrated that it is both possible, and I would argue preferable, to affirm the importance of spiritual life and not to restrict meaning to arbitrary self-definition.’

There has however been some resistance to the changes made by the Guides. The main contention is that, unlike the Scouts there is no option to choose a religious oath. There are several Guide groups that have refused to adopt the new promise and continue using the old, religious one. While I have found no article from any major newspaper or website critical of the changes made by the Scouts, the reforms in the guides have come under considerable criticism, especially from the conservative Right. The Church of England General Synod, on 12th February 2014, passed a resolution saying that ‘girls and women of all ages in the Girlguiding Movement should be able to continue to promise to love God when enrolled,’ and Alsion Ruoff, a member of the Synod, claimed that the change is ‘rank discrimination,’ and that it is part of  the ‘further marginalisation of Christianity in this country.’

Girlguiding UK has offered a concession, saying that Guide troops could, if they choose, have their own religious pre-amble to any swearing in ceremony, and say something like ‘In the presence of God I make my Guide Promise.’ But it is still too early to know whether this concession will be acceptable to critics.

These changes should rightly be seen as a victory for secularism and an advance against superstition. These changes will strengthen both youth movements, the Scouts especially, making them more appropriate to an increasingly secular nation. But while claims of discrimination are obviously spurious (given the favourable treatment of religious institutions, especially the Church of England), the Girl Guides do seem to have been heavy handed in response to groups refusing to adopt the new promise. The First Jesmond Guides for example have been threatened with expulsion from Girlguiding UK if they do not conform.

In an ideal world, not only would the secular promise be the default but there would be no religious promise at all. Despite this, I think it is important to not force people, atheist or theist, to make a promise they are not comfortable with.

Additionally, the relationship between these uniformed youth groups and organised religion is deep, so to sharply turn these groups secular could cause significant harm. Many groups, my own included, meet in a church hall and are not charged for the privilege. Without such an available, and low-cost meeting place, it would be much more difficult to keep the troop afloat financially and I have no doubt that many troops would close without the aid of churches. Both organisations do considerable good, and benefit not only their members but society in general. So an overzealous approach that harms the organisations, even if born of good motives, would be like cutting off the nose to spite the face.

The heavy handed approach taken by Girlguiding UK has damaged the organisation and has alienated some lifelong members. As a lifelong Scouter, I feel that it would be preferable to accommodate some heterodoxy, in order to keep the organisation unified, strong and better able to continue the valuable work they carry out.  All this controversy within the Guides is, ultimately, over one sentence, albeit a very important sentence, so I wouldn’t have thought it too difficult, or too offensive to the sensibilities of secularists, to allow Guides the same choice in promise as the Scouts.