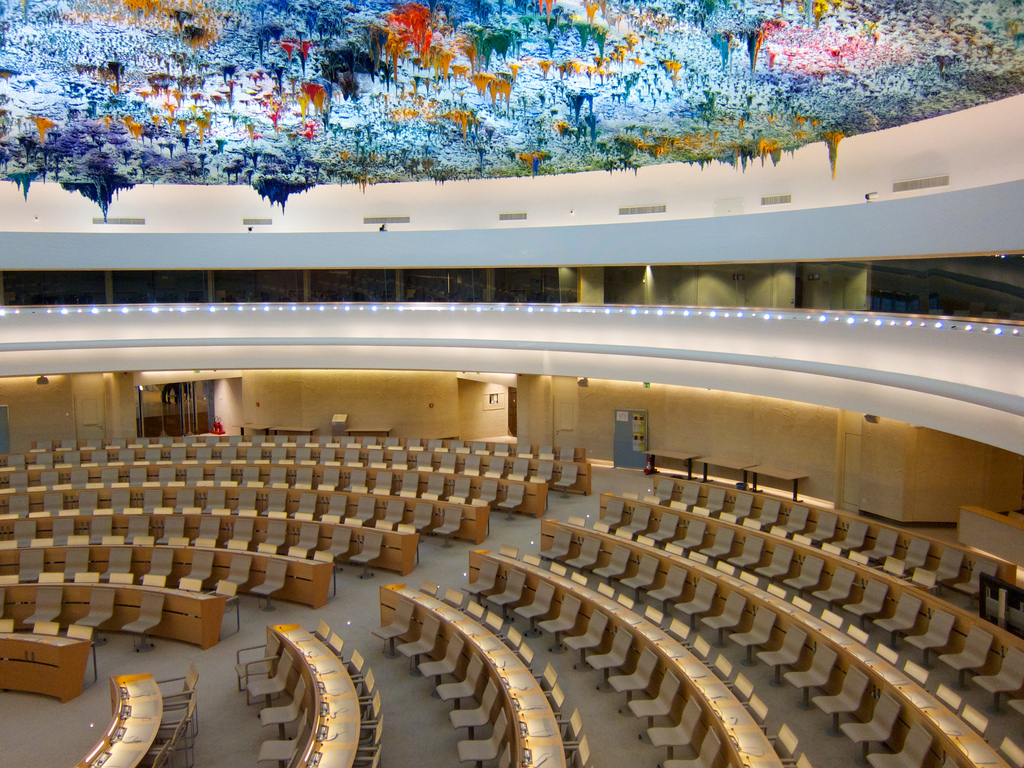 Amelia Cooper reports again from the UN Human Rights Council in Geneva, where she speaks on behalf of the British Humanist Association

‘There is no justification ever, for the degrading, the debasing or the exploitation of other human beings – on whatever basis: nationality, race, ethnicity, religion, gender, sexual orientation, disability, age or caste.’

This statement was made by the new High Commissioner for Human Rights, Prince Zeid Ra’ad al Hussein, in his introductory remarks to the UN Human Rights Council in Geneva: a powerful, timely reminder of the universality of human rights. Notable in this statement is the inclusion of ‘sexual orientation’, which has faced numerous attacks and denunciations as being outside the remit of the Council, despite the Universal Declaration of Human Rights’ emphasis that there will be no distinction ‘of any kind’ in the application of human rights. However, it is with great pleasure that I write to say that last night, following fierce debate, tense votes, and years of global advocacy, the Human Rights Council adopted a resolution based on sexual orientation and gender identity (SOGI), only the second of its kind.

The past year has been a tumultuous one for the rights of lesbian, gay, bisexual, transgender or intersex (LGBTI) people, with great successes regarding equal marriage taking place in the US and the UK, while elsewhere, such as in Russia, Nigeria, and Uganda, a spate of anti-homosexuality legislation has criminalized certain types of love, or made it impossible for LGBTI people to live openly. The global increase in homophobic aggression led one gay man to remark that ‘a hunting season is open, and we are the hunted’[1].

Without direct experience, however, it is easy to forget the rampant homophobia, both state-sanctioned and carried out by vigilantes, that permeates every aspect of daily life for LGBTI persons throughout the world – including in Europe.

Last week, I attended a side event hosted by ARC International, a leading advocacy group focused on achieving equality for LGBTI, and was shocked and heartbroken in equal measures to hear of the brutal violence that individuals suffer because of who they love.

Jabulani, from the South African Iranti Organisation, detailed innumerable cases of corrective rape and attacks carried out with impunity, ending by saying ‘The fact is that loving someone of your same sex is a direct threat to your bodily integrity’.

In Latin America, there are ‘curative clinics’ where LGBTI people are taken, abused and violated to ‘normalise’ their bodies. In the psyche of the perpetrator, this is not sexual abuse: it is a method by which people be ‘cured’ of their identity. The suicide rate among LGBTI youth in Latin America is 50% higher than their peers; in Central America, the life expectancy for transgender individuals is 24-28 years old. Transgender people do not have the benefit of ‘the closet’, due to their gender expression, and are therefore visible and oft targeted.

In Europe, Nori Spauwen of COC Netherlands said that the protection of LGBTI persons remains ‘a patchwork of national policy and Council of Europe recommendations’, and emphasized that having a legal, pro-equality framework is an indispensable precondition to elimination discrimination based on sexual orientation or gender identity. In the EU, more than half of all lesbian women have faced violence or verbal abuse in the past year, while crimes committed against LGBTI persons continue to be grossly underreported, due to the victims’ belief that nothing will change, or because they fear a homo/transphobic police reaction.

Any of these cases, on an individual basis, would suffice to show that discrimination based on sexual orientation and gender identity must stop; when together, they illustrate that this is a global scourge that must stop now.

Yesterday’s adoption of the resolution ‘combating violence and discrimination based on sexual orientation and gender identity’ is a critically important achievement in upholding the universality of human rights and creating a global framework to combat discrimination against LGBTI persons.

Introduced by Brazil, Chile, Colombia and Uruguay, and subsequently co-sponsored by an additional 42 states, the resolution expresses grave concern at acts of violence and discrimination suffered by LGBTI, calls for an updated study to be carried out by the Office of the High Commissioner for Human Rights, and ensures that the issue will remain on the Human Rights Council agenda.

The resolution faced a number of hostile amendments, including a proposal by Egypt (on behalf of ten states) to delete all references to sexual orientation and gender identity from the text. The Brazilian ambassador remarked that ‘Deleting all reference to sexual orientation and gender identity from this resolution would be the same as eliminating all references to women from the resolution on violence against women’. However, given that Egypt formed part of the core group who proposed the pernicious Protection of the Family resolution in June, their hostility to this resolution was hardly surprising.

A number of states spoke during the voting process, with impassioned statements from the resolution sponsors, including Chile’s statement that ‘this resolution does not seek to create new rights…there are some whose rights are more violated and need more protection’. Pakistan, speaking on behalf of the Organisation of Islamic Conference, framed LGBTI equality as a danger to the country, saying ‘The wider connotations of the term ‘sexual orientation’ can be extremely detrimental and inimical to our Muslim societies in particular, and to our youth as a whole’.

Thankfully, the resolution survived the persistent attempts to undermine it and was passed with by a vote of 25-14 (with seven abstentions, including from China and India) to huge smiles, happy tears and close embraces in a rare moment of emotional diplomacy.

While the resolution alone will not bring an end to discrimination based on sexual orientation and gender identity, it is a remarkable achievement in enshrining LGBTI equality as part of the international agenda, and provides a framework for further discussion of the issue. As the final regular session of the 2014 Human Rights Council has now closed, the resolution is an enormous step forward in terms of LGBTI equality, undermining the national legislation that criminalizes love and proving that human rights are truly universal.

For further information, see the joint NGO statement following the passage of the resolution.

[1] Dima, a Russian man who was left blind in one eye after an armed group stormed a gay community centre. Quoted by Channel 4, and featured in their documentary ‘Hunted’. http://www.channel4.com/news/gay-russian-sochi-hunting-season-we-are-the-hunted