All this week, young humanists are raising money for good causes. The BHA’s student section, the AHS, is hosting its annual Non-Prophet Week, and the International Humanist and Ethical Youth Organisation has launched its Better Tomorrow humanist charity drive.

In this article, AHS Secretary Caitlin Greenwood writes about the importance of humanist giving. 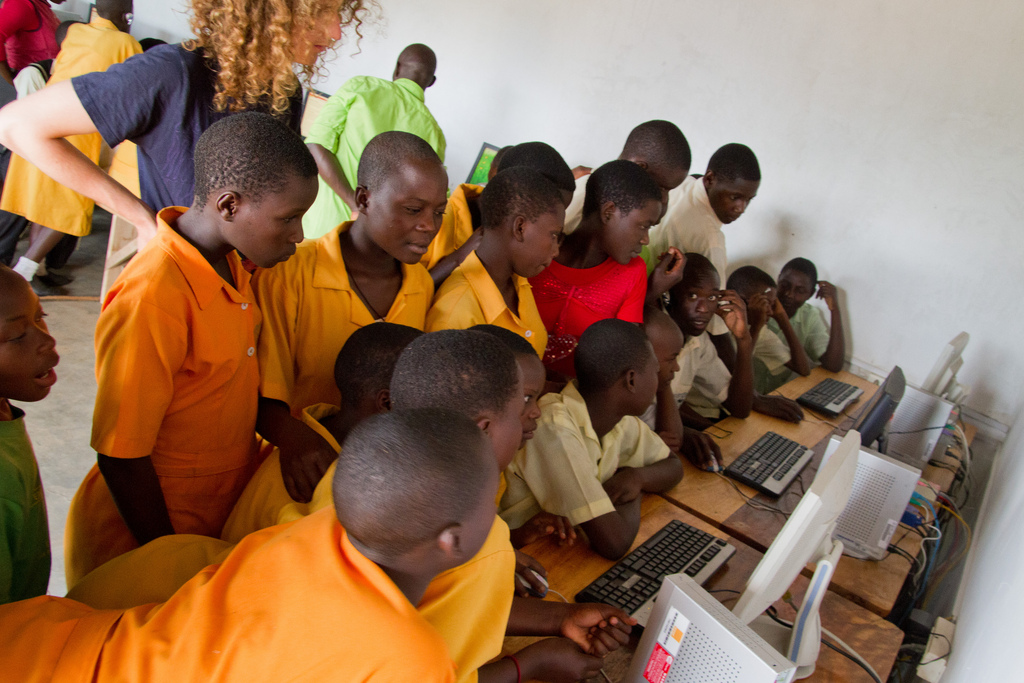 Schools in Uganda greatly benefited from last year’s Non-Prophet Week, as organised by non-religious students at universities across the UK and Ireland

Charity is often considered to be a uniquely Christian virtue, which is a tradition dating back at least to Thomas Aquinas. Aquinas stated that charity was the love between god and man, and between man and his neighbour. The 1822 New Catholic Catechism reaffirmed this, saying ‘Charity is the theological virtue by which we love God above all things for his own sake, and our neighbour as ourselves for the love of God.’ While some other Christian traditions have defined charity in a more restricted way, better reflecting the modern definition, they are in a somewhat of a minority worldwide.

The origin, then, of ‘Christian charity’ seems to be a conflation of a specific theological term, with a more generally used definition. But what of all those Victorian philanthropists, wasn’t their charity directed by Christian morals? Andrew Carnegie, perhaps the most famous philanthropist, was a member of a Presbyterian church, and surely he stands for so many others, too numerous to name? (Leaving aside, of course, the fact that Carnegie avoided theism for the first half of his life, and joined the church well after beginning his philanthropic efforts.)

Unfortunately, it is not quite so simple as all that. Simply wanting to do good does not mean one automatically does good. Victorian interpretations of Christian teachings often extended to the moral value of the working classes. They were not people simply fallen on hard times, but were worse than their clear moral superiors, the upper and middle classes, whose philanthropic duty was to reform them. In 1868, the Radical MP John Roebuck claimed his lifelong aim was ‘to make the working man as [. . .] civilized a creature as I could make him’. This set the tone for much of the philanthropy that was to follow over the next several decades.

Moreover, this moral superiority was not intended, entirely, to be levelled by charity. The New York Times in 1937 stated: ‘So the education in giving goes on from generation to generation. It is not merely the gift that counts or the help that is given the neediest; it is the acquainting of the families year after year, as children grow into youth and youth into manhood and womanhood, with the conditions about them and the cultivation of the habit of giving.’ Charity was conceived of as a permanent virtue, a sticking plaster to be applied to the topic of inequality. While campaigners throughout the 19th and 20th centuries did fight for – and achieve – a genuine reduction in inequality, it was rarely achieved through any kind of charitable giving.

The situation whereby charities, and charitable giving, actually perpetuate a problem rather than solving it, continues to this day. Consider, for instance the way unqualified people flocked to Haiti in 2010 or Nepal in 2015. These people all wanted to help, and were clearly willing to sacrifice their time and money. Unfortunately, their presence mostly served to slow down the aid efforts, rather than help them. The same could be said for the donated goods, many of which ultimately went to waste. A New York Times article from 2013 calls this ‘Philanthropic Colonialism’, the product of uninformed philanthropists thinking they know best, and actually making things worse. And in these cases, people really did think they were trying to help.

“…it can be easy to say that charity work is our moral responsibility. However, we also emphasise reason and evidence in our thinking to be an effective force for good.”

But what does all this have to do with Humanism? Well, for me, a part of the humanist worldview is an understanding that we have a moral responsibility to our fellow beings and to alleviate suffering and difficulty wherever we find it. As a consequence, it can be easy to say that charity work is our moral responsibility. However, we also emphasise reason and evidence in our thinking. If we want to be an effective force for good in the world it makes sense to start by working out which channels provide the most efficient ways to reduce human suffering. We at the AHS agree with the principles underlying the growing social movement known as effective altruism. Effective altruism is about trying to maximise your positive impact on the world not just through choosing charities that have the highest return in good achieved for resources invested, but through other aspect of your life such as your choice of career.

The AHS (The National Federation of Atheist, Humanist and Secular student societies) is the national umbrella organisation for student societies in the UK and Republic of Ireland. Each year, we hold ‘Non-Prophet Week’, in which we encourage our members to raise money for a particular cause. During last year’s Non-Prophet week we raised money for the Ugandan Humanist Schools Trust, an organisation which provides a secular education in a country riven with religious tensions. Our total was £2784.60, and by far the most ‘charitable’ act came from Jess Barnes from Nottingham, who took sponsorship from other students to shave her head, raising £620 and then donated the hair to a charity which provides wigs for cancer patients!

This year, we have chosen to support Give Directly, a charity which simply transfers cash to extremely poor people in Kenya and Uganda. A breakdown of their processes can be viewed on their website. Give Directly exemplify transparency in the process of charitable giving. But the really great thing about Give Directly is their evidence base. The approach of offering cash transfers, as opposed to microloans or other forms of aid, seems to be one of the most effective ways of reducing suffering, both in the short and long terms. Cash transfers have been shown to increase children’s nutrition and health in the countries of Malawi, South Africa and Uganda, and more broadly to increase access to education. In the long term, one study found that men’s annual income five years after receiving transfers had increased by 64%–96% of the grant amount. There is also no evidence that cash transfers significantly increase consumption of alcohol or tobacco- which is perhaps what those Victorian philanthropists would have expected. Instead, the money might be invested in the upkeep of a house, in some new equipment, or in sending some members of the household to school. There is also good evidence that many people save at least part of the money as security against future financial difficulty or for later investment.

Give directly are also continuing to collect data to be studied by social scientists, which may, in turn, help further identify ways of reducing inequality permanently, and having a direct impact on people’s lives. You can find out more on their website and at Give Well.

If you fancy supporting Give Directly, and us through Non Prophet Week, you might enjoy hearing about how our President, Richard Acton, will be wearing a colander on his head all week, or how Treasurer Luke Dabin will have his legs waxed in public. If acquisition is more your thing, I’ll be making humanist pants, and I can guarantee you’ll get yours in time for Christmas.