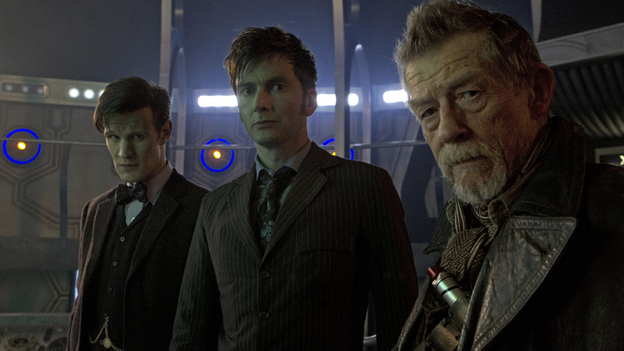 Tonight is the airing of a Doctor Who special, The Day of the Doctor. Fans are celebrating the show’s fiftieth anniversary, and as well as lighting up TV screens around the world, the special is showing in cinemas around the UK in 3D.

It’s worth celebrating the show from another perspective, however. It’s one of the most humanist television shows of all time. In fact, at practically every turn up to now it has presented the philosophy of its title character, the Doctor, as an emphatically humanist one. If there’s one thing the Doctor values, it’s human life, and if there’s one thing he consistently stands in awe of, it’s human potential. He abhors superstition; he scorns pointless prejudices; he believes fervently in reason; he is sympathetic to the beliefs of others, but will not kowtow to them when a fundamental liberty is under threat.

The show began in 1963 as a children’s program with an educational mandate. A mysterious old miser known as the Doctor, played by William Hartnell, would take his granddaughter and her two schoolteachers back in time to visit the Earth’s history, as well as into the future and into outer space, using speculative fiction as a means to explore philosophical questions and scientific ideas.

Its second story, The Daleks, was a parable about the evils of Nazism. It gave birth to rich science fiction concepts which took the show into a bold new direction, and would go on to test better with audiences than the historical format of later serials such as The Aztecs. The Daleks produced a strong template for the show’s future, in which it would continue to delve into history, but never again lose the science fiction backdrop which led it to discuss bold themes and big ideas.

The Doctor is one of pop culture’s most popular atheists. Famous atheists on TV tend to play into negative stereotypes. They are either the curmudgeonly, misanthropic intellectual (Dr. Gregory House on House, Dr. Perry Cox on Scrubs) or the sanctimonious liberal douche (Brian Griffin on Family Guy, Kurt Hummel on Glee). But the Doctor, by contrast, has evolved into a life-affirming, swashbuckling hero who is adored by children everywhere.

To maintain the show’s longevity, it introduced the plot device where if the Doctor is fatally injured, his alien physiology can “regenerate,” creating a new body with new personality quirks and a different face. The mantle of the Doctor has been passed on officially to a dozen or so actors in the show’s history, with many other actors playing alternative versions or unofficial Doctors over the last half-century. Like no other character on TV, over fifty years we have seen his many sides. He has been a narcissist, a boor, a clown, a grump, a convincing portrayal of a bipolar person (David Tennant, I’m looking at you) and a wide-eyed dreamer. Whatever his face however, the Doctor always believes in the values of the Enlightenment.

The show has some great pedigree with British Humanism as a movement, as well. Douglas Adams, the legendary writer and ardent humanist, was one of the show’s most influential scriptwriters. It was he who introduced the show’s former leading lady, Lalla Ward, to scientist and BHA Vice-President Richard Dawkins at a party in 1992, with BHA Distinguished Supporter Stephen Fry looking on. The pair would later marry. Professor Dawkins would himself become one of the show’s many scientist cameos, which have included Distinguished Supporter Professor Brian Cox.

The programme’s showrunners have also tended to be socially conscious atheists. When the show was brought back from cancellation in 2005, Russell T Davies didn’t shy away from expressing his opinion of religion. The second episode after its revival features the joke that “weapons, teleportation and religion” are banned aboard a fictional satellite. For its season finale that same year, Davies clearly asked himself what could make a Dalek scarier, given that they were already pitiless aliens bent on racial purity. His answer made terrifyingly good sense:  religion.

Steven Moffat has taken this theme further. All delivered in absurdist good humour, he shows that in the distant future, ‘the Church’ has become a military institution which patrols the galaxy. It is an organisation of superstitious cowards with guns, fearful of its so-called ‘Papal Mainframe’. It is also susceptible to manipulation and influence from others in power. To the Doctor, like every religion, this is just one of the absurd things humans do – he loves them for their potential as much as for their naivety. The Doctor exploits the Church’s weaknesses to great effect in A Good Man Goes to War (2011), when the Doctor (played by Matt Smith), who is for the most part a staunch pacifist, must rescue his companion Amy who has been held captive for the duration of her pregnancy.

When religion is portrayed positively, the show stops short of crediting the tenets of belief themselves. In Davies’ 2007 episode Gridlock, the singing of hymns binds people together in despair. But these hymns are not to a God who will save them. These people are singing to themselves. They are coming together as a community. It is the Doctor who saves them, a man of science who burns with moral conviction. Though he is himself sometimes revered as a god, and even presented with Biblical imagery, he knows better than anyone how far this is from the truth. He is someone who lives with the burden of a dark past, and the knowledge of his own frailty – both moral and physical.

In tonight’s fiftieth anniversary, the two most popular Doctors in the show’s history (David Tennant and Matt Smith), who just so happen to be the most recent, will confront this same dark past. With the exception of the young Doctor played by the old William Hartnell who tried to brutally kill a caveman in An Unearthly Child, the show’s premiere story, the Doctor has always married his Enlightenment values to an adjacent set of progressive ethics. But in 2013, the show has introduced a “dark Doctor,” played by John Hurt, who hails from a time in the Doctor’s life when he was forced to fight a war between his own people, the Time Lords, and the Nazi-like Daleks. The Doctor eradicated both species.

This act is so violent, and so contradicts the Doctor’s strict moral code, that he has worked hard to forget this incarnation of himself and make peace with what he did. As stated in its most recent finale episode, The Name of the Doctor, this is a man who broke the vow his name signifies, and has lost the right to call himself the Doctor. Though John Hurt’s ‘Doctor’ is the same essential person and a man of science, he is also also a warrior, one whose valuation of life is subject to a consequentialist philosophy. Not a great deal is known about him, but he would seem to mark a break away from the Doctor’s strict humanist code. He will go head to head with his less morally flexible replacements.

In its fiftieth year, the show is putting its title character’s values at the heart of the action. Let us see if in the next fifty years, the Doctor’s Humanism will win out.

I haven’t read it, but there’s a critical book on the subject (Humanism and Doctor Who: A Critical Study in Science Fiction and Philosophy by David Layton), and a nifty video on this subject did the rounds on YouTube earlier this year, before getting taken down by a copyright claim. If you can find it, it’s got fifty years of the Doctor’s humanist speeches edited together to great effect.

EDIT: Ah, the creator of the video managed to resolve the copyright issue and upload it anew yesterday. Enjoy!