Ben Greenhalgh shares a short narrative based on the writings of David Hume. 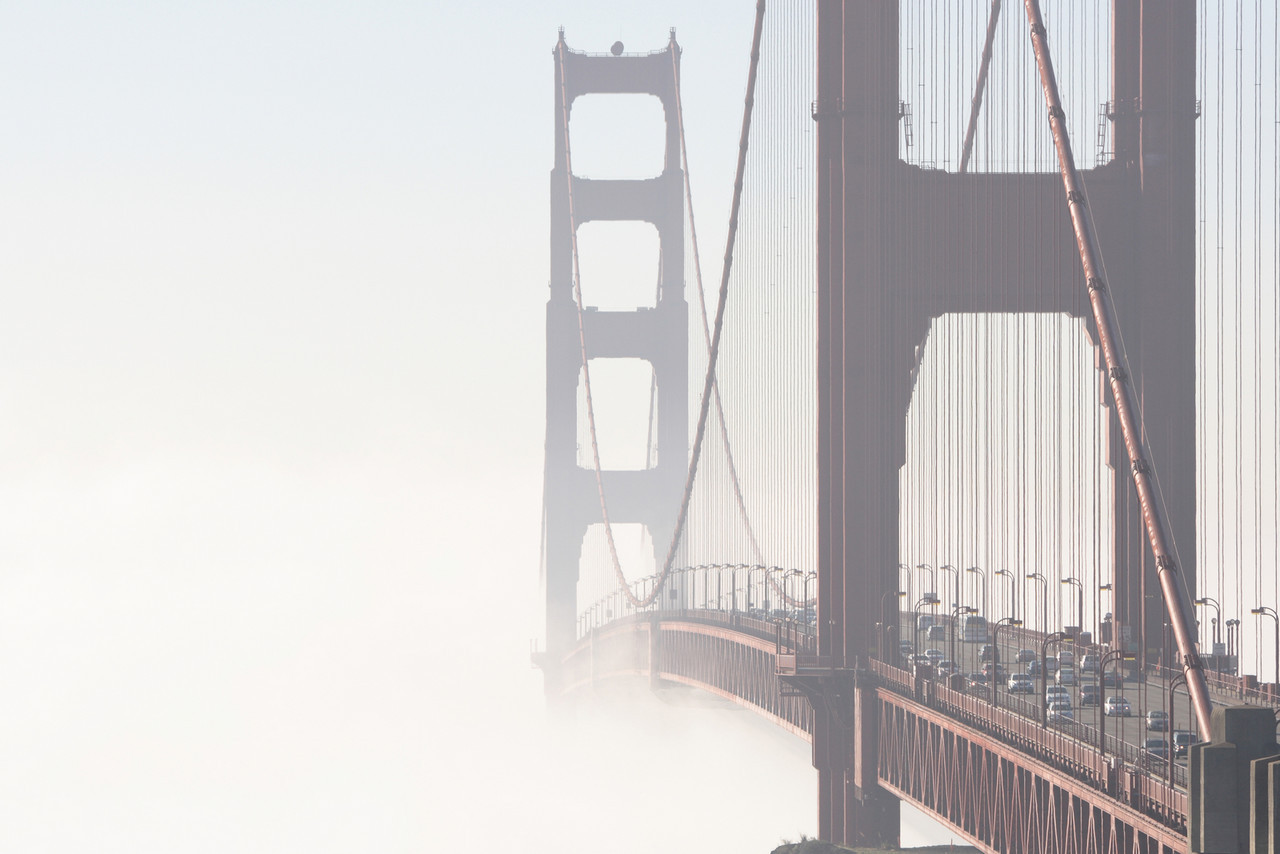 The road and the high beams of the bridge were hidden, blurring seamlessly into a thick mist surrounding it. Photo: Dirk-Jan Kraan.

I have never enjoyed crossing it at night. To describe it crudely, as my limited vocabulary allows, it is as if a section of the Golden Gate Bridge were hacked out and jammed between the high walls of a gorge. Nothing lives below it but air and height, and to look over the edge on a clear day tingles every lower inch.

On that day, as daylight struggled against dusk, all that could be seen as I moved across it were the small lights against the quiet, dry blooded metal. The road and the high beams of the bridge were hidden, blurring seamlessly into a thick mist surrounding it.

As always, I quickened my pace until I happened upon a silhouette. He had the stillness of a gargoyle, out of place on the metallic structure, sitting watching over the gorge. His gaze, although difficult to tell, was suggested in the position of his head, raised into the tie-dyed sky of the falling sun.

The small thin lights above him outlined only his form, his torso strong, confident and, above all, purposeful.  For, as he would tell me later, no man ever threw away his life while it was worth keeping.

“My life will end tonight.” He said turning to me. “I’m sorry you have to be here, I truly am, but is it wrong that I am also glad?”

My heart began to thrash against my ribs, my feet began to sweat and nothing but a cracked clichéd response to offer in return.

Knowing now, although I couldn’t see him at the time, he smiled and I equally knew it was only me on that bridge that night who felt any hint of fear.

His voice lilted softly as if weakened instantly by the mist, the words only just able to reach my ears.

“The police? Of course, for what is about to happen here is a criminal act and must entail their invite.”

“Yes, they will talk to you. Just wait there.” My voice was raised more than I would have liked but I fumbled for my phone in my pocket.

“If it is a crime, I ask against whom?”, he continued. “I have no one who will benefit financially from my death so it is not within societie’s laws a crime. If I am to die here tonight I will no longer contribute to, or take from society any longer. So the crime must only be against God or myself”.

My phone couldn’t find a bar of signal in the mist. I plunged it back into my pocket as my mind hurried to find conversation.

Having shed the blanket of organised religion a long time ago, I had been given the role of a preacher to a man in his final hours. In that moment I was sure that to not give an answer, to not talk or help this man would forever haunt me.

“God doesn’t want you to die, I am certain”.

“Thank you. I am sure I will not shun him by ending this life. Unless perhaps he thinks I am special?”

“Yes we are all special”.

“Because we are human?” He paused for a moment in a lengthy sigh.  “How self-serving of us. How much we lord over ourselves, almost divine yes? Yet, my life, like yours, is as fragile as any other being on this planet. I can be taken by a single hair, fly or insect. If I am so special, existing above all other animals, is it not an absurdity to suppose that human prudence may not dispose of what depends on such insignificant causes?”

“You must be sick, sir, to want this. It isn’t natural to want such a thing”.

“Natural?” His chuckle lingered, held as an echo by the gorge. “You believe suicide is against nature?”

I was taken by surprise in a moment of honesty.

“Yet we build houses, fly and sail the ocean. Even this bridge we find ourselves on encroaches upon nature. In all these ventures we have used our minds and bodies to produce innovation in the course of nature. If ending my life early is against nature surely all these things are equally innocent or criminal. An attempt to extend my life in a hospital bed many years from now would surely break the same rules?” I stepped forward, bringing the man into focus as he went on. “Is it wrong to use my mind, the same mind which innovated into nature? The same mind that God, or indeed nature has provided for me to take what is also given to me? To the universe I am matter, nothing more”.

“I am sure you are a good man, and have so much to live for. Think of those you are leaving behind”. At the time I hoped the guilt of leaving his family would sway his decision, to this day I am unsure as to whether he had any at all.

He turned his head and looked at me, gazing into me for what seemed like an age before he spoke.

“My friend, no man ever threw away his life while it was worth keeping. If I were to fall now of my own accord I would only cease to do good, if as you say, I am a good man. If I am a man full of vice then I do the world a service, no?”

As I took steps towards him I wondered why he didn’t threaten to jump. It wasn’t until I was right beside him that I remarked upon his head angled awkwardly as he politely kept my gaze. His body leant impotently against one of the metal struts.

“The truth is my friend, I need your help. Many people have helped me get here, one to this exact place. Each has said almost the same as you in an attempt to stop me. All I have answered to the best of my ability my reasons for doing so. All have played their part in helping me to this point, yet I am afraid I must ask of you to help me to the final end. Help me end what is truly my own. I entrust that act to you as I am unable to myself”.

I took a step back, not to move and run for help, but so that he was no longer in pain keeping my eye.

“All you need know is that life has become a lengthy burden and I want to rid myself of its existence.   Although liberty has always been in my heart and mind, I have never been able to grasp it until this day, to take control of my own fate. I wish only to use my will prudently for my own self”.

His legs were thin, gaunt and useless yet his face, although pale, gazed into everything with constant thought.

“My only fear is for you. To help me would be a crime. Yet, if I were able myself, we may never have met as I would have been rid of life long ago”. His head sunk for the first time to the girder below. “Those for whom life is bearable will never understand. Your help they will see as an act of murder, to take a life I valued. Yet in reality, if I am sure to voice my choice based on my own sentiment, your act for me is nothing but a most loving release. For I do not value my life, so how can it be murder to take it from me?”

I stood for a moment before climbing over to his side. We spoke for some time, but never another word about his decision. And, as the sun finally surrendered to night, he turned to nod to me.  I slowly unbalanced him, took him by the hands and carefully let go as his weight took him from the rusted frame and into the mist below.