Blogger Christian Franz shares his strongly-worded, individual perspective on charges of ‘militant atheism’ in Britain and elsewhere, and more besides. 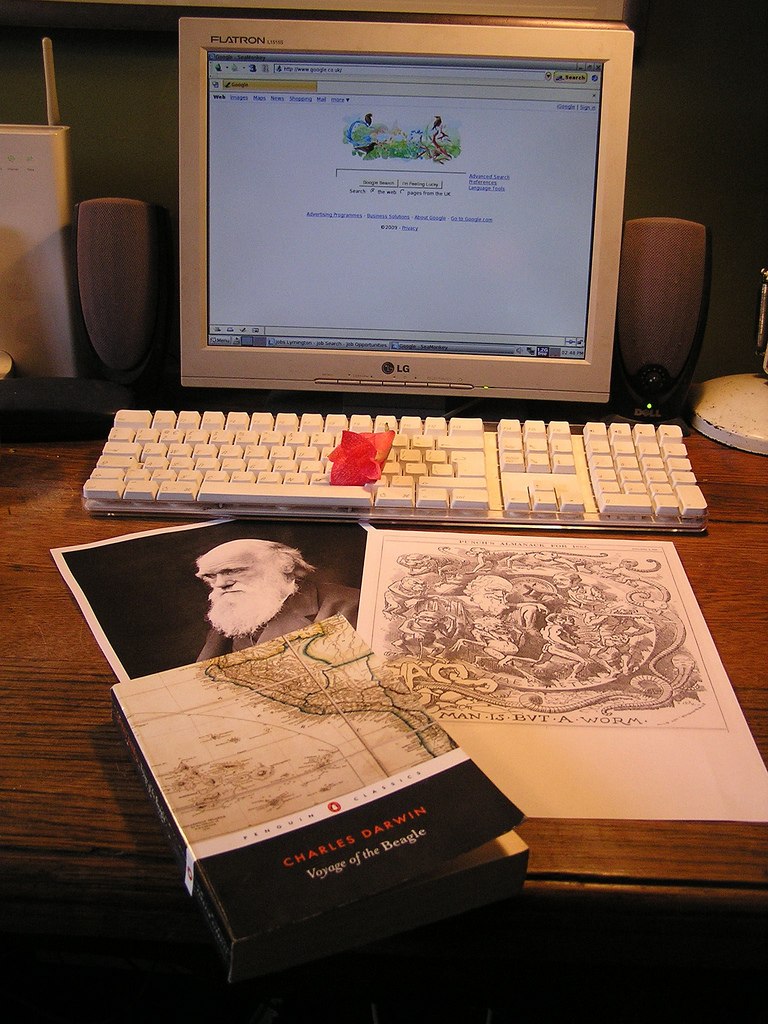 Is there really such a thing as militant atheism? Photo: Ashley Basil

If you believe what some politicians would tell you, the UK is developing a new problem; a social evil so menacing that it threatens to eclipse ‘Islamophobia’ any day now: militant atheism.

There is a certain progression to be observed: first come accusations of ‘special rights’, then we hear dire warnings of a slippery slope, invariably ending in persecution of religious people and death camps for believers, run by – you guessed it – militant atheists.

This calls for some explanation – on more than one account: by and large, ‘militant atheists’ are about as threatening as ‘fundamental hippies’. Coining the phrase is demonstrably an attempt to tarnish a term of non-description (‘atheist’) by combining it with a word evocative of conflict, violence, automatic weapons, scimitars, and death: ‘militant’. And yet, this attempt is about as successful in suggesting lethality as the term ‘combat doe’.

The most ‘militant’ of atheists was Christopher Hitchens. He earned that distinction by publicly assailing men of the cloth with remarks as cutting as ‘you are an idiot!’

The world’s second most ‘militant’ atheist would be Professor Richard Dawkins. Soft-spoken and infuriatingly polite, he’s known for book signings where, on occasion, he brings along a sharp pen.

So it’s not by their actions that militant atheists have gained the ‘militant’ epithet; there is a decided lack of streets overflowing with blood, no posters yelling ‘massacre those who insult atheism’, and to my knowledge no atheist has yet blown up a church on the grounds of advancing atheism.

So, for better understanding, we need to turn to the source. Recently, a number of British exponents have complained about the exploits of militant atheism:

In a highly publicized BBC-produced episode of The Big Questions (and a same-day publication on their web page), Voice For Justice UK speaker Lynda Rose raised awareness about the alarming fact that militant atheism is the reason why Christians are now persecuted in the UK.

Shortly thereafter, Prime Minister David Cameron went on record saying that living in a religious country was easier for people of competing faiths than in a country run by (presumably militant) secularists.

And just a few days after that, former MP Anne Widdecombe – in a strangely pre-emptive evocation of Godwin’s Law – bemoaned the fact that today Christians have it more difficult to live in the UK than Nazis.

What is going on here? From a rational thinker’s point of view it surely seems as if they left a lot of lead in the pipes feeding the drinking fountains of Westminster Palace. Let’s take a closer look.

But now, apparently, the newly claimed sexual rights of a minority are being prioritised over all other traditional rights, to the extent that ‘religious’ rights are now being assigned a separate, and seemingly subsidiary, category.

It’s a bit disconcerting that Lynda – who is a lawyer – makes this mistake: there are no ‘rights of a minority’. She was referring to a couple in the UK who had their existing right to their sexuality enforced. Lynda not only makes it sound as if a sexual minority (gay people) have special rights; she then asserts that there is something called ‘traditional rights’. First, of course, there are no special rights, and in fact, everyone has the same rights. And further to this, no civilized country in the world recognizes ‘traditional rights’. After all, once it is determined that something is unethical (such as slavery, or the right to discipline your disobedient wife), it is done away with, all ‘tradition’ be damned. ‘Traditional’ never trumps ‘just’. Most importantly, though, there scarcely any special rights attained only through adherence to a particular religion in the UK, restrictions on ascending to the throne notwithstanding. Today it is one law for all. Or at least it should be, anyway.

What we do see here – and we’ll see this again – is the feeling of entitlement: people are loath to give up privileges that they used to have. In this case, it is the privilege of imposing one’s own view of sexuality on others, something which Christianity has enjoyed for over two millennia, but has now been curtailed.

We next turn our attention to Minister of Faith, Baroness Warsi. In trying to make sharia law more acceptable in the UK, Warsi first remarked that[ii]

There is no doubt that the word ‘sharia’ carries huge challenges in relation to public relations. If you talk about anything [related to] ‘sharia’, the first vision people get is chopping off of people’s hands, having four wives and all sorts of unusual practices which, in today’s world, are not compatible with the values which we live by.

Above is an astute observation. The word ‘sharia’ does have a bad reputation: much like the words ‘apartheid’ and ‘Spanish Inquisition’. Personally, I believe that this is well deserved, on all accounts.

The most aggressive post I get is [sic] from people who are secular fundamentalists.

Of course atheists are vehemently opposed to these ideas, ideas that would introduce superstition and medieval morals into present-day jurisdiction – but I would submit that vehement opposition is to be expected not only from ‘militant atheists’, but from everyone who can count to eleven without having to remove a sock.

Warsi’s efforts to impose her preferred version of law are frustrated by people who do not share her ideology. She believes that she is entitled to bring Sharia law into UK’s courts, and spots the enemy among what she believes to be militant atheists – those people who publish so many ‘aggressive post[s]’.

Not being outdone by amateurs, David Cameron enters the fray asserting that[iv]

it is easier to be Jewish or Muslim in Britain than in a secular country.

The reason? Militant atheists, of course. He goes on to extol the virtues of a religious society – blithely ignoring that each and every social advance of the past two hundred years has come at the cost of lives among humanists, and in the face of strong opposition from the Church. To me it seems as if Cameron is building up a straw man and defending religion for one reason only: because the devout in his constituency are starting to grumble that their privileges are being taken away, that they can no longer tell the gays what to do.

More frighteningly, though, Cameron concludes his speech with this:

Greater confidence in our Christianity can also inspire a stronger belief that we can get out there and actually change people’s lives, and improve both the spiritual, physical, and moral state of our country, and even the world.

I guess it does take a pesky militant atheist to point out that if you replace ‘Christianity’ with ‘Islam’, Cameron would be saying exactly what the Taliban and Boko Haram are saying: they, too, believe that by stronger adherence to belief, that by following scripture more closely, this world will become a better place. The Taliban in particular are quite explicit about this; they state that their intent is to improve this world by changing the way people behave: by making them stronger believers.

Changing people’s lives based on faith is a terrible idea. Ask any woman in Pakistan or Saudi Arabia. When we talk about ‘improvements’ based on religion, we almost always talk about restrictions: no gay marriages, no abortions, no women’s education, no blaspheming, no work on the holy day, etc. The more confidence people have in their religion, the more likely they are to impose their religious ideology on others. Ironically, there is only one group who can’t do that: (militant) atheists – who, by definition, don’t have a religion.

Christians now have quite a lot of problems, whether it’s that you can’t display even very discreet small symbols of your faith at work, that you can’t say ‘God bless you’, you can’t offer to pray for somebody, if it’s an even bigger stance on conscience that you’re taking, some of the equality laws can actually bring you to the attention of the police themselves.

So I think it is a very difficult country now, unlike when I was growing up, in which to be a Christian, an active Christian at any rate.

A former MP, Ann has unfortunately developed a distinct habit of being economical with the truth. She did so when during the ‘Intelligence Squared’ debate she claimed that everyone who joined the Waffen-SS had to sign away their religion. The exact opposite is a documented, fact. People who joined the SS had to sign a paper stating that they were gottgläubig – believers in God – and affirmed that they were not atheists.

Widdecombe does it again here when she claims people can no longer wear religiously-themed jewelry, say endearing well-wishes, or promise piety to other people.

In reality Ann is angry at another fact: she has lost the privilege of an automatic religious bonus. People now openly scoff when someone offers prayer as ‘help’, and do not look impressed when someone openly wears a crucifix, crescent, or Star of David. Her importance and status as an openly devout believer have diminished – which is what irks her. In short, she’s angry that she’s become unpopular, and wants to assign blame.

Well, at least the believers are staying true to form – if there ever was an Abrahamic ritual, it’s the scapegoat.

Is it really that simple? Are politicians really trying to shift the blame from them to a minority? After all, much of what was said is monumentally stupid. Wouldn’t the political elite be more careful to avoid putting their foot into their collective mouth? Obviously, no. The reason for that, though, can be explained:

As we know, any sufficiently advanced stupidity is virtually indistinguishable from religion. That is what is tripping up politicians: they are increasingly coming down on the wrong side when they try to decide: ‘Is this still stupid or already religion?’

And then they do something ‘militantly’ stupid.

[i] “Human vs. Religious Rights“, No Blogs, No Glory

Christian Franz is a secular blogger and the author of No Gods, No Glory – Unpreaching the Choir. You can also visit his blog , No Blog, No Glory – further unpreachings.