Peter Clarke’s extensive report for the Department for Education into the ‘Trojan Horse’ allegations was released on Tuesday, and found ‘co-ordinated, deliberate and sustained action, carried out by a number of associated individuals, to introduce an intolerant and aggressive Islamic ethos into a few schools in Birmingham.’ The report highlights the role of the British Humanist Association (BHA) in January facilitating three whistleblowers to make complaints to the Department of Education, regarding standards and the state of staff and student welfare in Park View School, over a month before the ‘Trojan Horse’ letter was mentioned in the press. In April we published most of their claims, which we summarised as ‘inequality and gender discrimination, homophobia, alleged extremist views, creationism, bullying, and unfair employment and disciplinary practices’. The majority of these issues had not been publicly aired at the time; today we can see which allegations have been confirmed in the Clarke Report.

Our whistleblowers claimed that ‘Creationism and intelligent design have been taught in science lessons by at least one science teacher.’ The Clarke Report says that ‘Evolution is mentioned only briefly and students are simply directed to the page in the textbook. A teacher who did this went on to tell students that they were looking at the textbook merely to comply with the syllabus but that “that was not what they believed”… Staff have said that creationism has been taught as fact in science lessons and in assemblies at Park View School. A member of staff at Park View reported that pupils had said: “I’m made of clay[…]There is no evolution. I’m made of clay because that is what Mr Hussain [the acting headteacher] told us in assemblies”.’

Our whistleblowers claimed that ‘There have been rumours that in sex and relationships education (SRE) lessons given by the same teacher that boys were told that “girls must obey their husbands” and that ‘”wives are not allowed to say ‘no’”. A worksheet was handed out to year 11 boys with a section “The Wife Obeying Her Husband”, which says ‘A woman must obey her husband as long as he does not tell her to perform any haraam (unlawful) acts…’

The school strenuously denied that this worksheet ever existed, but Clarke found that ‘[SRE] lessons for boys centred on the rights of men and women within marriage. On the lesson worksheets it was written that if a woman said ‘No’ to sex with her husband, the Angel Gabriel would strike her down and condemn her to an eternity of hell. Following these lessons, there was commotion in the corridors, with boys telling girls that they couldn’t refuse them and saying “We have been told this”. An assembly following the lessons was supposed to put right the SRE teaching but again the boys were in effect told that “this is what it says in Islam but it is different in the eyes of British society”. Staff reported that one of the teachers who gave the lessons said: “Luckily we were able to hide all the controversial worksheets very, very quickly and managed to get rid of all of them between the two Ofsted inspections”.’

Clarke’s report makes no mention of 9/11 or 7/7 but does note some teachers claiming that the Boston bombings and the murder of Lee Rigby were ‘hoaxes’ in social media conversations between different staff.  There is also a conversation where several teachers disparage the British armed forces, including the charity Help for Heroes.

Our sources alleged that ‘In RE, pupils were given a list of non-Muslim members of staff and set homework to try and convert them.’ This hasn’t been found, although our own research pointed to a number of concerning aspects of the RE syllabus, which seemed to be taught from an Islamic perspective, and the report found that ‘Only modules in Islam are studied from Years 9 to 11.’

Our whistleblowers alleged that ‘The school has legally determined to have Islamic instead of Christian collective worship, with students sitting segregated side-by-side based on gender. It has also encouraged students to pray by putting posters up in school corridors. Some of these read ‘If you do not pray you are worse than a Kafir’ (i.e. non-Muslim). There is a call to prayer every lunch time.’

The Clarke Report pointed out that it has been alleged that ‘an assembly where pupils were told that if they did not pray they were worse than a kaffir (a derogatory term for non-Muslims), supported by a poster with the same message’, and ‘We have been told by staff at Park View that a tannoy to broadcast the ‘adhan’, the Muslim call to prayer, was installed. It could not only be heard across the whole school site, but also by residents in the local community, and was used every day to call students and staff to prayer. However, it was switched off immediately before Ofsted visited the school and also on the days when the Department for Education and Education Funding Agency officials visited. I was informed that a member of staff at Park View used a microphone from a high window to shout at students who were in the playground, not attending prayer. Some girls were embarrassed when attention was drawn to them because girls who are menstruating are not allowed to attend prayer. But still, the teacher called to them.’

It was alleged that ‘Certain male teachers expect boys to be at the front of the class and girls at the back, and ignore girls when they want to answer a question.’ Indeed, Clarke found that ‘In Park View maths lessons, where all the teachers are men, the girls were separated at the sides and back of the classroom, while the boys sat in the centre, towards the front. In many other subjects, students sat on different tables with boys and girls segregated. Single sex classes exist across the entire age range in PE, RE and PSHE at Park View.’

With regard to PE, it was alleged that ‘Girls are not allowed to take part in PE or sport activities with boys, even non-contact sports or where a male coach is present, the reason given for this being it makes male Muslims feel uncomfortable.’ The Clarke Report found that ‘The Park View girls’ tennis team was taken to a local schools’ tournament by PE staff after school. When they arrived they found men present. The teacher had to return the girls to school and was suspended by governors until she had written a letter of apology. When interviewed, Mr Hussain explained to me that the girls had to return to the school because it was tennis “coaching”, where there would inevitably be physical contact between the male coaches and the female pupils.’ The Council’s report also cited ‘curtains being fitted in the sports hall for girls’ PE lessons’.

It was also alleged that ‘Members of staff have shown prejudice against girls not wearing a headscarf, with some girls being forced by staff to do so. If a boy and girl are seen together more than once parents are called in.’ Clarke found that ‘At the recent Year 11 Prom, staff report that they were surprised to see the girls arriving with their heads uncovered. They expected them to be covered, as they had been at school, and realised that this was really their normal way of dressing. Girls at Park View complained to staff that their parents are too readily contacted if they are seen speaking to a boy. They also say that conclusions are drawn about conversations which are completely unfounded. They feel that they are being harassed.’ He also said that prefects are allegedly expected to ‘report to the headteacher the names of staff and students who exhibit behaviours which are deemed unacceptable by conservative Muslims. These include behaviours such as boys and girls talking to each other or touching each other; boyfriend and girlfriend relationships’. And he included instant messages between teachers discussing how to better segregate pupils.

Finally, it was alleged that ‘Female members of staff and pupils are often treated as inferior by male Muslim staff members. Complaints about this behaviour are not taken seriously.’ Clarke found that ‘Inequalities for female staff include lack of progression and promotion, lack of opportunities for training, attacks on their manner of dress and being ignored or disrespectfully treated by senior male staff and governors. Female pupils also suffer inequalities.’

It was alleged that ‘Many pupils have expressed homophobic views and these are not challenged… teachers who have wanted to try and address the homophobia have been told they are not allowed to.’ Clarke reports on Park View governors expressing ‘Openly homophobic views’ at meetings whilst social media messages between teachers at the school were both unchallenged and derogatory, referring to those supporting same sex marriage as ‘animals’ with ‘satanic ways’ and seeing the acceptance of LGBT couples as ‘a sign of the end times.’ ’Senior staff have been shouted at in governing body meetings when they attempted to discuss the LGBT agenda. Male and female staff have reported that they have to hide their sexuality. Students say that their teachers do not talk to them about such matters.’

It was alleged that ‘The school nurse is not allowed to discuss sexual health issues with pupils.’ Clarke did not report on this matter. But below you can see two posters – one provided by the Department for Education for schools to use to advertise their nursing services, and one from Park View School in 2012. It’s not hard to spot the difference. 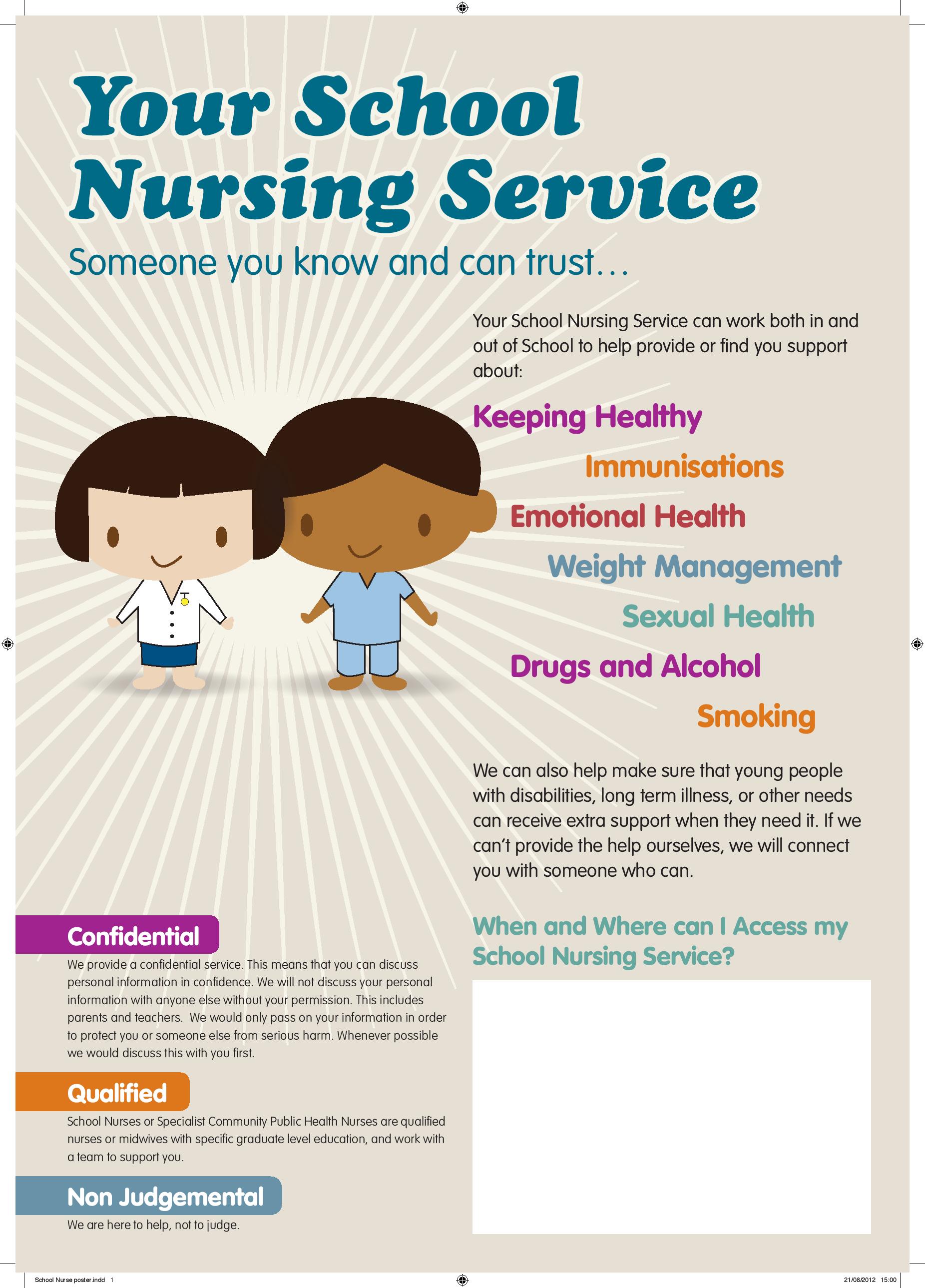 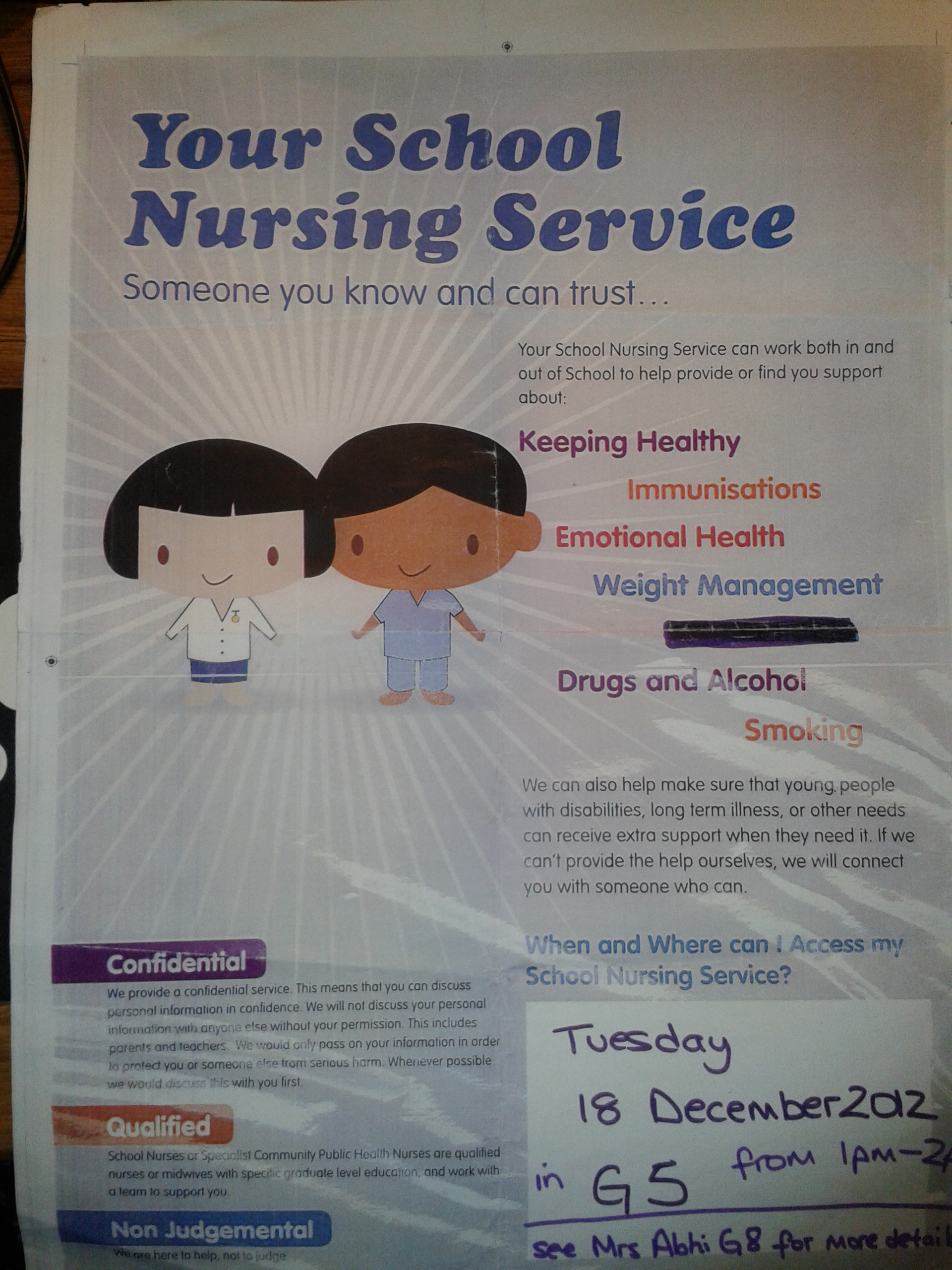 The original allegations made claim to the fact that schools were cheating in Ofsted inspections by ‘telling children answers in Urdu’ which they would then repeat in English to the inspector, or deliberately teaching about religions other than Islam whilst inspectors were in the school. Clarke’s report does not cite these examples but does make reference to other allegations for example about the SRE worksheets being hidden, the call to prayer tannoy being switched off, and that at Golden Hillock ‘Staff state that senior leaders checked their classrooms and removed Islamic display materials before the Department for Education visited.’

In April, our original allegations included the promotion of friends and relatives of governors and the appointment of male Muslim teachers with extreme views, with jobs not advertised to other interested staff or the general public as a whole. Further, staff who complained or had issues with the school had investigations brought against them leading to resignations. Clarke’s report extensively corroborates all of these issues, making note that there was evidence of staff harassment and bullying, as well as certain positions being unfairly filled by people who knew the governors and by people with certain views.

These are distressing allegations. Clarke’s report largely confirms the initial claims made by our whistleblowers, with conservative Muslim practices being taken to an extreme within Park View School, creating a volatile environment for both staff and students in which science, RE and sex education are improperly taught and a culture of harassment and bullying exists. In such a climate, the initial whistleblowers who brought this issue to the attention of the BHA who passed it on to the DfE, and Ofsted, and who subsequently worked with us to speak out across the media to the wider public, should be commended for the bravery of their actions, especially given the risks to their careers and reputations they faced in bringing the scandal to light. Their actions have led to a widespread inquiry into the nature of teaching and management in Britain’s state school sector, and will have a lasting impact on the sector for years to come.

Richy Thompson is Director of Public Affairs and Policy at the British Humanist Association. He was previously the BHA's Campaigns Manager (2015-2017) and its Campaigns Officer on Faith Schools and Education (2011-2015).